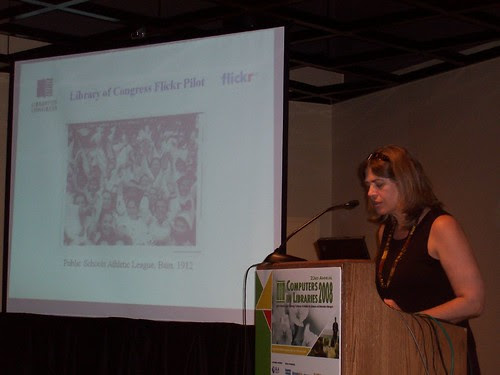 Michelle Springer from the Library of Congress (LOC) did a 15-minute Cyber Tour about this project.

Flickr's tag line is "Share your photos. Watch your world." That seems appropriate for what the LOC wanted to do.

Major challenge -- copyright status statement. None of the available content licenses in Flickr were appropriate. The LOC has no right to state firmly that content is definitely in the public domain. They talked to Flickr, who then created a new model. "No known copyright restriction."

Yahoo and LOC then created a modified terms & conditions, which then allowed LOC to have an account.

Currently have two sets of photos. All photos have in-depth descriptions and a link to the high quality image photo on the LOC web site. Some photos are being posted(by other users) in groups within Flickr.

All 3,100 photos where already available on the LOC web site and had no known copyright restrictions.

Accomplishments:
Added tag by type:
Most popular images have reached their maximum number of tags.

Other institutions are going to follow the LOC's lead.

She pointed us towards the project's FAQ for more information.

Roy Tennant also talked about this project in his presentation, so look for more info in those notes.