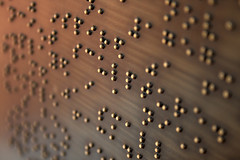 According to the World Intellectual Property Organization (WIPO):

The Marrakesh Treaty eases the production and transfer across national boundaries of books that are specially adapted for use by people with visual impairments, most of whom live in lower-income countries.

The Marrakesh Treaty came into effect for WIPO member states on September 30, 2016, including the United States. However, the U.S. Senate has not ratified it yet. As of today, they last took action on it in early 2016.

To understand the effect the treaty will have on Title 17, we can just look at the letter sent from the U.S. Department of Commerce to Vice President Joe Biden, when the text of the treaty was given to him.  It says:


The bill implements provisions of the Marrakesh Treaty that aims to expand the availability of print materials in accessible formats such as braille, large print, and specialized digital audio files, for the use of persons who are blind, visually impaired or otherwise print disabled.  A limited set of changes is proposed to section 121 of the Copyright Act.  The proposed bill broadens the scope of works currently covered by section 121 and elaborates of the section's definition of "blind of other persons with disabilities."  It also specifies that accessible format copies may be exported for the exclusive use of such eligible persons in other countries that are parties to the treaty, and for U.S. citizens or domiciliaries located abroad.

In talking about the treaty, Secretary of State John Kerry wrote:


The Marrakesh Treaty includes two core elements designed to promote access to published works for persons with print disabilities. First, it requires every Treaty party to provide an exception or limitation in its national copyright law to copyright holders' exclusive rights of reproduction, distribution, and making available published works to the public, in order to facilitate the availability of books and other printed materials in accessible formats. Second, the Treaty requires that parties allow "authorized entities" (for example, libraries, or organizations devoted to assisting the visually impaired) to distribute such "accessible format copies" to other authorized entities and to "beneficiary persons" (individuals who meet defined criteria for visual or other reading-related impairments) in other countries that are party to the Treaty.

It has been said that millions of people world wide would be positively impacted by the Marrakesh Treaty if every country ratifies it.  Let's hope that the U.S. Senate is pushed to ratify the treaty soon and to make the requisite changes to our own law.
Posted by Jill Hurst-Wahl at 9:30 AM No comments:

Article: From Dusty Boxes to Data Bytes Acquiring Rights to Special Collections in the Digital Age

The Reading Room is an open access scholarly publication focused on special collections.  Its second issue contains an article by April M. Hathcock entitled, "From Dusty Boxes to Data Bytes Acquiring Rights to Special Collections in the Digital Age."  This is remains a topic that people are digging into because there is still so much to be digitized and made accessible.  If you're one of those focused on it, this article may be for you.  Abstract:

It is the end of the academic year  and many students are heading away from campus for the summer.  Our MSLIS students may be going to an internship or to work (in a library or elsewhere).  Yes, some might be taking classes (on campus or online).  As part of their professional development during the summer, I hope that they will take time to explore the material that those of us in the field are consuming. With that in mind, I asked members of Facebook ALA Think Tank Group for suggestions of library-related blogs, podcasts, or other content they would recommend to MSLIS students.  Below are what the people recommended.

If you are an MSLIS student, I hope you will take time to read or listen to what your colleagues have recommended. You might sample each by reading or listening to 1-3 items.  Often reading/listening to just one item (episode/post) is not enough to get a real sense of source.

Open Access Journal:
Blogs:
Podcasts:
Why have I focused on blogs and podcasts?  I know that not everyone prefers long form text (books).  In addition, blogs and podcasts often capture what is happening now, rather than what was happening when a particular book was being written.  (The content of a book can become dated even during its publication process.)

Is there a library-related blog or podcast that you would add to this list?  If yes, please leave that information in the comments, so we can all benefit from the information.  Let's make this an even longer list of resources! [5/16/2017: And I've added more recommendations above!]

If you know an MSLIS student, please consider sharing this list with her/him. Then follow-up and ask the person what she/he liked, didn't like, or learned.  Please know that the person might not like these suggestions and that is okay.  (In fact, knowing what you like or don't like is a good learning experience.)
Posted by Jill Hurst-Wahl at 9:00 AM 3 comments:

Here is another libguide on copyright, which is worth using as a reference.  It might also be a good model for other copyright guides.  This libguide from Monroe (NY) Community College covers both copyright and the Creative Commons for instructors.  Its major sections are:


Posted by Jill Hurst-Wahl at 9:00 AM No comments:

One of my favorite copyright court cases is Tasini v. New York Times (filed in 1997), both because of its potential impact on databases and that I am a freelance author.  When looking online for information this case, the trail from its beginning to its final conclusion is not well documented. You have to know that it took several twists and turns in order to find those twists and turns.  And you have to know that there were two similarly named cases AND that there was at least one other case (class action lawsuit) which related to Tasini v. NYT.

When I do an Internet search on this case, I easily find older articles from the early decisions in this case.  Places like Wikipedia, which a person might use to locate additional sources, currently (May 2017) contains older information and is incomplete.  Therefore, it would be easy for anyone to research this case and come to an incorrect decision about its final conclusion (which actually occurred in 2014).

With all this in mind, I have compiled resources which can help someone research Tasini v. New York Times.  These should provide someone with "guideposts", which can help understand the path of the case and then locate additional resources.  (And if  this blog post does help a newbie understand Tasini, then I'll be pleased.)

How Do You Digitize a 357-Year-Old Atlas That’s Nearly 6 Feet Tall?

According to Atlas Obscura:


If you’re the British Library, you get creative and set up a special studio to photograph the titanic Klencke Atlas.


The British Library has a video of the process:

My recent class development activities and teaching have been tripping over articles and documents worth remembering.  Although this is a few years old, it is worth knowing that it exists. In this  2011 OCLC report, Ricky Erway wrote:


So in an extremely casual survey, we asked some of our colleagues in libraries, archives, and museums to identify initiatives where non-book digitization was being done “at scale.” We didn’t define “at scale,” because we thought we’d know it when we saw it. It wasn’t always so easy. We heard from lots of places: some with minor achievements, others making a big difference. We selected a few of the latter stories to share with you here. Each one starts with a picture of the equipment in use at the site along with a sample from the collection being digitized.


There are nine stories from nine organizations. I appreciate that the stories include the names of vendors used.
Posted by Jill Hurst-Wahl at 9:00 AM No comments:

It turns out that figuring out whether state documents are copyrighted is a tricky question....

Thankfully, the Harvard Library have created this web site to help people identify the relevant laws in each state. The U.S. map is a clickable infographic, which gives the viewer a quick indication of  whether state documents are protected by copyright or in the public domain. You can then click on a state to receive more details.

This State Copyright Resource Center is worth bookmarking, as is the web site Copyright at Harvard Library.
Posted by Jill Hurst-Wahl at 10:00 AM No comments: