The European Union General Data Protection Regulation (GDPR) went into effect on May 25. Ahead of that date, all of us received updates and reminders from all the Internet services we use, reminding us of how our data is collected and used.  Those notices were useful, annoying, and a prompt to clean up where I've given permission for my data to be used.

If you are outside of the United States, you are now seeing a notice at the top of this blog, which is in keeping with the GDPR.  Blogger (Google) has placed this notice on the blog on my behalf.  For those of us inside the U.S., the notice is not visible.  So that everyone knows what it looks like and says, I have captured a screenshot of it from the French URL for this site. 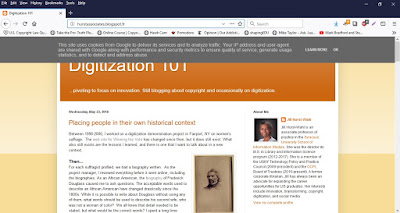 Placing people in their own historical context

Between 1998-2000, I worked on a digitization demonstration project in Fairport, NY on women's suffrage.  The web site for Winning the Vote has changed since then, but it does still exist. What also still exists are the lessons I learned, and there is one that I want to talk about in a new context.

For each suffragist profiled, we had a biography written.  As the project manager, I reviewed everything before it went online, including the biographies. As an African American, the biography of Frederick Douglass caused me to ask questions. The acceptable words used to describe an African American have changed drastically since the 1800s. While it is possible to write about Douglass without using any of them, what words should be used to describe his second wife, who was not a woman of color?  We all knew that detail needed to be stated, but what would be the correct words? I spent a long time asking people of their opinion.  I even asked the question on a couple email discussion lists. I didn't feel as if I received good answers and my choice - European American - was not yet a term that was widely used (and it still isn't).  Thankfully, our project historian located text of Douglass talking about his second wife and that text is how we talked about her.  He said:


No man, perhaps, had ever more offended popular prejudice than I had then lately done. I had married a wife. People who had remained silent over the unlawful relations of white slave masters with their colored slave women loudly condemned me for marrying a wife a few shades lighter than myself. They would have had no objection to my marrying a person much darker in complexion than myself, but to marry one much lighter, and of the complexion of my father rather than of that of my mother, was, in the popular eye, a shocking offense, and one for which I was to be ostracized by white and black alike. (Douglass, Life and Times… p. 534.)

Many weeks ago, I participated in a webinar where the first two speakers started their presentations by placing themselves in a theoretical or cultural context.  When it became my turn, I quickly did the same, although I had not planned on doing so. At this point, I don't remember what I said about myself, but it likely included that I come from a corporate background and that I'm originally from south-central Pennsylvania (and yes that does matter).  I believe the other two women included in their descriptions the theories they use for their mental models.

A few weeks ago, I was at a training session where we were asked to provide our preferred pronouns when we introduced ourselves.  This was not my first encounter with the need to do this, but the first time that one person's preferred pronouns (they/them/their) caused a bit of angst among a couple of the participants.

When we look at historical figures - those who are no longer living - we often have to put them in context, because they did not do that for themselves. Most did not publicly state what words they wanted used when describing them.  Nor did they state the framework they used when thinking about an issue.  We use whatever information we can find to try to build that context, knowing that it could be quite flawed.  A good example of this is Eleanor Roosevelt's relationship with two of her female friends.  People guess and speculate, but Roosevelt left nothing behind to put those friendships in a context, which answers the questions we have.

While we were fortunate with Winning the Vote to find text of Douglass talking about his second wife, we really don't know what words he or she (Helen Pitts Douglass) used to describe her ethnicity.  Now, however, we have an opportunity to build the context for a living individual whom we are adding to a repository (e.g., The History Makers).  What might we capture in text or metadata?  The first thoughts that come to my mind are:
Yes, that would be work and, yes, that would be helpful.  In 100 years, when the words we use to describe people have changed again, knowing how someone described themselves would solve a headache that I know will occur.

By the way, perhaps we each should get this started by writing this information for ourselves and placing it somewhere were it can be found (online or offline).

The photo is of a Carte de visite showing Frederick Douglass. This work is the collection of St. John Fisher College, Lavery Library.
Posted by Jill Hurst-Wahl at 8:40 AM No comments:

Copyright for Academic Librarians and Professionals was published in 2014.  According to the publisher:


This practical handbook will show students training to become college and university librarians how to make informed decisions regarding the use and availability of print, non-print, and online resources. Based on Butler's 17 years of experience conducting copyright workshops and courses, her book matches real-world scenarios with interpretations of the law from copyright experts in the field to provide a thorough understanding of current, everyday applications of copyright law in higher education.

This book is available only a paperback edition.

FTC Disclaimer: Digitization 101 is an Amazon affiliate and receives a small commission if you purchase a product or service from an Digitization 101 Amazon link.
Posted by Jill Hurst-Wahl at 9:23 AM No comments: 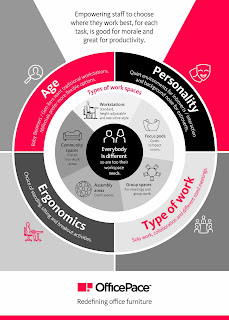 This webpage by OfficePaceTM reminded me of everything I have loved and hated in any workspace, including some that held digitization activities.  Of course, I can look at this information and also think of our libraries and their layout.

We frequently "make do" with whatever furniture or layout that we have.  We decide to not spend money on furniture or design, because we believe our money is better spent elsewhere.  Yet we know from personal experience that a person's work environment can have a huge impact on the person's productivity and relationship to the workplace.

If you need to make a business case for new(er) furniture or a different layout, perhaps this information from OfficePace will help you do just that.
Posted by Jill Hurst-Wahl at 9:30 AM No comments:

Book: Copyright for Teachers and Librarians in the 21st Century

I want to continue to highlight relevant books and hope to do so more regularly.  This book, Copyright for Teachers and Librarians in the 21st Century, was written by Rebecca P. Butler and published in 2011.  According to the publisher:


Here is a practical copyright handbook designed to help librarians, media specialists, technology coordinators and specialists, and teachers stay within copyright law while making copyrighted print, non-print, and Web sources available to students and others.  Library educator Rebecca Butler explains fair use, public domain, documentation and licenses, permissions, violations and penalties, policies and ethics codes, citations, creation and ownership, how to register copyrights, and gives tips for staying out of trouble.

In addition, Butler covers copyright considerations for different types of media, She also:


covers how to deal with those who would have you break the law; orphan works; file sharing; distance education; digital rights management; the law: classroom exemption, handicap exemption, library exemption, other important federal exemptions in the K-12 schools, parodies, and state laws; copyright lawsuits; relationship of plagiarism to copyright; and copyright and privacy.

This book is available in soft cover format only.

FTC Disclaimer: Digitization 101 is an Amazon affiliate and receives a small commission if you purchase a product or service from an Digitization 101 Amazon link.
Posted by Jill Hurst-Wahl at 10:16 AM No comments:

I am passing along what I received in email.

DIGITAL DIRECTIONS: Fundamentals of Creating and Managing Digital Collections
October 15-16, 2018
Commerce Club - Atlanta, Georgia
Guided by a faculty of national experts, join colleagues from institutions large and small for two days of instruction on best practices and practical strategies for the creation, curation, and use of digital collections. Network with colleagues who have similar challenges, interact with faculty one-on-one, and gain a comprehensive introduction to digitization and digital preservation.
Are you just getting started with a digital project? Trying to bring several digital projects together into a cohesive digital preservation program? Or are you well into a digital collections project and need a refresher on the latest standards and best practices?
The Digital Directions conference is geared toward professionals working with digital collections at archives, libraries, museums, historical organizations, tribal organizations, government agencies, business and special libraries and archives, and other organizations that steward digital collections. Discounted student rate is available.

More information is available on the NEDCC web site.  Note that the conference agenda is coming soon.
Posted by Jill Hurst-Wahl at 9:09 AM No comments:

It takes a team 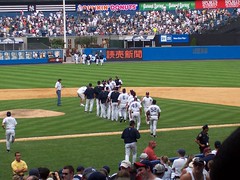 Organizations value people who can work independently and work in teams. We know that there are some people who do one style of work better than the other. But the reality is that even those individual performers depend on others. Look closely at someone who seems to live completely independently from others and likely you’ll find that there is a support network in the background. Sadly, sometimes that network is never acknowledged publicly.  However, take away the network and the person will fail; sometimes slowly, sometimes quickly.

Last week, it took an ad hoc network of people to connect me with my cell phone, which I had misplaced on the way to the airport.  That nerve-racking experience was my reminder that I am not in this world alone and that I am deeply dependent on others.

No matter your reason for reading this blog, take a moment and remember those people around you - coworkers wherever they may be located, vendors, family, friends, the person who makes your coffee, etc. - who help you to do the work that you do.  When you get a chance, let them know that you recognize their assistance and give them a word of thanks. Who knows, that positive action could come back to you when you need it.
Posted by Jill Hurst-Wahl at 8:30 AM No comments: