Fair Use in a Digital World

It is the end of Fair Use Week.  Interestingly, this was also the week in my ALA copyright eCourse that discussed fair use, so I've been thinking about it, even if I've not written much here. Thankfully - checking Twitter - others have been writing about it a lot.

I stumbled across a post on the Fair Use Week website entitled The Digital Millennium Copyright Act Promotes Creativity. I don't naturally think of the DMCA as protecting creativity, but the article reminded me of take-down notices. Take-down notices can stifle creativity and personal opinions, but the person can challenge the notice. As the post notes, there is move to change how the take-down notices work, which would smother creative efforts.  Read it to learn how.

How does this relate to fair use? The writer looks back to when the DMCA was originally drafted:

In drafting the DMCA, Congress protected fair use; according to a 1998 Senate report, “[t]he Committee [on the Judiciary] determined that no change to section 107 was required because section 107, as written, is technologically neutral, and therefore, the fair use doctrine is fully applicable in the digital world as in the analog world.”

This is an important reminder. Fair use isn't just for print. Fair use works with digital materials. Yes, we need to exercise our fair use muscles everywhere!  When a publisher tells you that you need a license to use something - or automatically grants you a license during the pandemic - consider if you can rely on fair use.  Likely you can!

Posted by Jill Hurst-Wahl at 4:42 PM No comments:

Webinar: Fair Use Gone Viral: Predicting the Future of Copyright 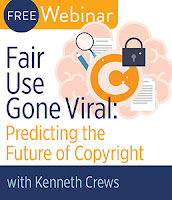 This just popped into my inbox!  I am huge fan of Kenny Crews, so I've signed up for this and hope you will too.  The event is free.

Description: Courts keep deciding cases—but the context of teaching, publishing, news reporting, and entertainment has changed radically during the COVID-19 pandemic. Many of the legal challenges and consequences now unfolding will be with us long after the pandemic has ended. It’s incumbent on librarians and educators to develop an understanding of fair use that recognizes its strengths and flexibility. In this free webinar, esteemed copyright expert Kenneth D. Crews will lead you on an exploration of some of the latest legal cases involving fair use, considering new possibilities and their implications specifically for librarianship and education. You’ll learn the legal ramifications of what Crews has deemed an “evolving normal,” with heightened demand for remote education, work from home, and online content, and you’ll learn where fair use fits into these contexts.

Participants will receive a coupon for a $5 discount on Crews’s book Copyright Law for Librarians and Educators: Creative Strategies and Practical Solutions, Fourth Edition.

Subscribe to Digitization 101 through Feedblitz
Posted by Jill Hurst-Wahl at 9:32 AM No comments:

Fair Use Week: Can Fair Use Survive the CASE Act?

The Copyright at Harvard Library Blog is starting Fair Use Week with a guest post from Kenneth Crews on Fair Use and the Case Act.  Crews begins:

When Congress thinks of COVID, it seems to also think about copyright.  Congress made that connection at a critical moment this last December.  Embedded in the appropriations bill that gave emergency funding to citizens in need, was a thoroughly unrelated provision establishing a copyright “small-claims court,” where many future infringements may face their decider.  The defense of fair use will also be on the docket.

I encourage you to go over there and read the post.

Subscribe to Digitization 101 through Feedblitz
Posted by Jill Hurst-Wahl at 9:37 AM No comments:

Feb. 22: The End of Library Ownership? A Fair Use Week Discussion

I thought I had posted this, but I hadn't.  Yes, there is still time to register!

Register now for a special Fair Use Week discussion on Monday, February 22 at 4:00 p.m. ET on "The End of Ownership." with:

Schultz and Perzanowski are the authors of The End of Ownership: Personal Property in the Digital Economy (MIT Press).

Once you register, you will receive a Zoom link for the event.

For more about the book, read my January 2021 blog post.

Subscribe to Digitization 101 through Feedblitz
Posted by Jill Hurst-Wahl at 3:17 PM No comments:

I feel as if I grew up using microfilm, so I was intrigued by a history of that format published in December 2020. "Microfilm: The Rise, Fall, and New Life of Microfilm Collections" was written by the founder of the Internet Archive, Brewster Kahle, with the help of Rick Prelinger, professor at UCSC, and founder of the Prelinger Library. The 15-page paper is available in multiple formats.

In all the times I've used microfilm, I've never thought about its creation or what the inventor had in mind. Kahle wrote:

The dream of using motion-picture film stock to take photographs of document pages was pioneered and promoted by a brilliant American named Robert C. Binkley. Beginning in the late 1920s, he tested, wrote about and championed microfilm, not only as a means of making copies for preservation, but for distributed access to documents as well. Binkley saw the potential for democratization of knowledge and the positive impact that distributed learning might have on society. He advocated for research and scholarship that took place outside of university walls; for citizen-led collecting and preservation of historical documents; and for microfilm as a means of publishing books in small quantities, especially academic monographs that might not be profitable for the publishing trade. His writing is replete with visions of technology as a means to solve the age-old problems of scholarly publishing and as a means of increasing the historical understanding of the population as a whole. If he had lived to see the early Internet, he might have viewed it as validation of the ideas he expressed in the 1930s.

Kahle goes on to write about the commercialization of the format, then how the format is no longer being used. There is microfilm which contains valuable sources and which needs to be saved. Digitization is an important option for preserving the information and making it more accessible.

If you have microfilm or know of organizations that have microfilm, consider how to make its content more available. Yes, consider digitization.  If you cannot digitize yourself, find a partner.

Subscribe to Digitization 101 through Feedblitz
Posted by Jill Hurst-Wahl at 8:30 AM No comments:

Digitizing Books at the Internet Archive

The Internet Archive has been digitizing books for many years and recently passed two million volumes. To do this work, the Internet Archive invented a scanner and the software which runs it. The Scribe scanner is used at their scanning centers around the world.  The Archive notes:

We never destroy a book by cutting off its binding. Instead, we digitize it the hard way--one page at a time.

They have posted a 40-second video of one of their Scribe scanners in action. The video is available on Facebook and Twitter. A big smile crossed my face watching it, given the beginnings of this blog was in digitization. Sadly, I could not get it to embed here.

Subscribe to Digitization 101 through Feedblitz
Posted by Jill Hurst-Wahl at 8:30 AM No comments:

Copyright and Fanfiction: A Primer

I came across this and think it is worth sharing, because this can be a hot topic.  Jacqui Higgins-Dailey, who was a public librarian and is now a full-time residential faculty librarian at a community college, has written about fanfiction and copyright. Her post covers:

She does a nice job summarizing what you need to know and cites her sources. So if you're interested in fanfiction and copyright, give it a read.
Subscribe to Digitization 101 through Feedblitz
Posted by Jill Hurst-Wahl at 8:30 AM No comments:

I'm pleased to be part of this event.  Registration is free and open to all.

Co-hosted by the Internet Archive and Library Futures, this webinar will address the most commonly repeated myths about controlled digital lending, countering misinformation and disinformation about the library practice now in use by hundreds of libraries. Attendees will hear from authors, librarians, copyright specialists, and policy experts as they respond to the common misconceptions about controlled digital lending.
Feb 10, 2021 1:00 p.m. ET / 10 a.m. PT
Registration: Register for the Zoom event here. Questions for the event can be submitted through this form.

Posted by Jill Hurst-Wahl at 8:30 AM No comments: