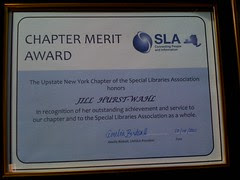 On October 15, the Upstate New York Chapter of the Special Libraries Association honored me with this Chapter Merit Award.  Me?  Wow!  Thank you to Elaine Lasda Bergman for her kind words at the event and for giving me this on behalf of the Chapter.

I joined SLA in 1990 and went to my first SLA conference in 1992.  According to my records, I began volunteering at the Chapter level in 1995 and been active ever since somewhere in the Association.  Over the years, those in SLA have been important to me  - even helping me find consulting clients - and, in return, I have given of my time to the Association (where we all met).

Thank you to those who were active in the Chapter in the early 1990s!  Some of you inspired many of us to get involved and stay involved.  And thanks to those elsewhere in the Association who were informal mentors over the years, and who also pushed and pulled me into various activities and committees.  A piece of this award belongs to all of you!
Posted by Jill Hurst-Wahl at 3:30 PM No comments:

Dear digitization company, are you meeting the needs of potential clients?

Earlier this week, I spoke with someone who has overseen a rather large digitization program this year, which digitized a variety of materials.  The person said that they had not planned on building their own digitization facility for this program, but ended up having to.  They had thought that they would be able to find a company that could handle all of the work, including digitizing a variety of material types.  Unfortunately, companies that convert materials specialize in specific types of materials.  In addition, companies that do conversion may not create metadata or load items into the asset management software. However, that isn't what all organizations want.  Some organizations want to work with a company that can do it all and do it well.

If you are a digitization vendor and someone came to you to do it all, could you?  Would you?  Or would you let a prime opportunity (and income) walk away?
Posted by Jill Hurst-Wahl at 8:45 AM 1 comment:

The Regents Adivsory Council on Libraries met via conference call on October 13.  Due to our schedules, the meeting was delayed from its original September date. Below are my informal notes from the call.  (These are not official minutes.)

Gerald Nichols was elected chair of the Council for the next year and John Hammond was elected vice-chair.

2020 Vision: John Hammond gave a report from the 2020 Vision Task Force.  A first draft has been disseminated through several discussion lists.  It will also be sent directly to the Regents.  A second draft will be prepared to include feedback on the first draft.

There will be a session at NYLA about the 2020 vision and look forward to hearing comments that occur then.  Deputy Commissioner Jeffrey Cannell and Regent Roger Tilles plan to be at the event. There was much discussion about how to ensure that the Council receives a lot of feedback from those that attend the NYLA session.

The goal is to give a final report to the Regents in April.

2012 Meeting Schedule: The Council will have a conference call on January 12 to review the next draft of the 2010 Vision.  The Council will also meet on March 13 by phone.  [The final meeting for 2011 will be held in December in NYC.]

Update on the Research Library: The Research Library has now been open for a full year on Saturdays.  Anecdotal data shows that people are traveling to use the State Library on Saturdays and researchers (including graduate students) are using the expanded hours.  The Library is doing a survey of researchers in order to gather more input.  Loretta Ebert noted that the Dutch collections are receiving increased use.

There is a goal to open a public computing center on the 7th floor of the State Library, part of the BTOP grant to create computing centers across New York State. Ebert mentioned a desire to increase collaboration and alliances in this area.  More information on the BTOP grants is available on the Library Development web page.

There are discussions about how to allow collaborative licenses across entities.  This is something that came up during the 2020 Vision process and has been mentioned in other context.

Division of Library Development:  Carol Desch reported.  There are two BTOP grants in NYS - one for Upstate NY (over $9 million) and one for NYC.  All of the 30 computing centers are up, except for the one at the State Library.  Video conferencing is part of the hardware that is being installed in these centers.

Thanks to NYLA for helping to get the law amended about construction grants in NYS. The new law sunsets after three years, so it will be important see the impact of this change and advocate for its extension, if the impact is positive.

LSTA funding was cut at the federal level for 2011-2012.  Money coming to NYS from LSTA is based on population and the State's population has been decreasing. Carol gave more details about the impact of this, which I couldn't type fast enough to capture. LSTA funding is used for some work/staff at the State Library, NOVELny and grants to libraries/library systems.

Jerry Nichols asked about the new 2% tax cap:  How will this impact libraries?  The law will sunset in eight years, but what will happen to libraries before then? What data is the State Library collecting and will we be able to understand the impact of the tax cap from that data?  (Yes)

Relevant Meetings at NYLA Annual Conference in Saratoga Springs, NY:  Based on the conference call today, here are relevant sessions at the upcoming NYLA conference:

Posted by Jill Hurst-Wahl at 11:30 AM No comments:

This is not a lawsuit that I was familiar, so thanks to Peter Murray for bringing it to my attention via Google+.

Quoting the Chronicle of Higher Education:


Those plaintiffs [AIME and Ambrose Video Publishing Inc.] claimed that UCLA had violated copyright and breached its contract by copying DVD’s of Shakespeare plays acquired from Ambrose and streaming them online for faculty and students to use in courses.

The judge dismissed the lawsuit and provided "a little bit of good news, hardly definitive, for the fair use claim that was being made by UCLA."  (Quoting Peter Smith)

Here is the even better news, according to The Chronicle:


UCLA decision increases the chance that the HathiTrust digital-library consortium will prevail in its effort to fight off a separate copyright lawsuit brought by the Authors Guild over the digitization of books from university libraries.

That insight was given by James Grimmelmann, an associate professor at New York Law School.  Of course, it is up to the court to decide about the Authors Guild lawsuit, but we could use some good news in terms of copyright and digitization.
Posted by Jill Hurst-Wahl at 9:13 AM No comments:

What we learned from 5 million books (video)

The research in this 14 minute TED video was made possible by Google's book digitization efforts. The two researchers present this serious information in a fun way and demonstrate that reading isn't the only thing these digitized books are good for.