The Trans-Pacific Partnership Agreement (as proposed) as not stayed in the news in the U.S. and seemingly has not been the subject of any of the Presidential Election debates.  The full-text is online in the U.S., however, I think the Canadian version is easier to navigate and read.   Intellectual property is in chapter 18.  Perhaps our politicians will pay more attention to this in 2016 and really debate its merits? We'll see.
Posted by Jill Hurst-Wahl at 10:00 AM No comments:

With increased activity on data analysis, big data, text mining, and the like, you might wonder if copyright law covers this type of use.  U.S. copyright law has no specific exceptions related to text mining.  However, in the U.K., there is guidance on this.  The guidance says:

An exception to copyright exists which allows researchers to make copies of any copyright material for the purpose of computational analysis if they already have the right to read the work (that is, they have ‘lawful access’ to the work). This exception only permits the making of copies for the purpose of text and data mining for non-commercial research. Researchers will still have to buy subscriptions to access material; this could be from many sources including academic publishers.

Publishers and content providers will be able to apply reasonable measures to maintain their network security or stability but these measures should not prevent or unreasonably restrict researcher’s ability to text and data mine. Contract terms that stop researchers making copies to carry out text and data mining will be unenforceable.

Could this be something the U.S. might provide guidance or specific rules on?  If yes, is this something that might happen soon, or will we catch-up in 5-10 years?
Posted by Jill Hurst-Wahl at 10:00 AM No comments:

Comments on a U.S. Legislative Framework Regarding Mass Digitization 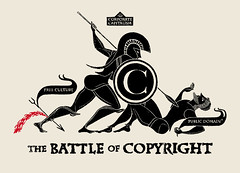 In June, I blogged about "Orphan Works and Mass Digitization: A Report of the Register of Copyright"and noted that there was a period for public comments.  That period closed on Oct 9, 2015 and resulted in 83 comments.  It is worthwhile looking at the list to see who submitted comments, and whether your professional association is among them.  Yes, among the comments are people and organizations who are "pro" the idea being put forth (extended collective licensing) and those who are against it. One of the people against it is Dr. Cory Doctorow, who eloquently wrote:


As someone who depends on archives and libraries for research in my daily creative
labor, I count myself lucky to live in an era of such unprecedented access to works spanning many eras and regions.

At the same time, I'm also frustrated by collateral damage arising from the abolition of formalities for copyright registration, coupled with the extension of copyright terms. These two facts mean that much of the ephemera that tells the stories of everyday people from bygone eras are automatically copyrighted, with no visible rightsholder. They're orphan works, without any significant commercial value, but nevertheless protected by the "author's monopoly" for periods that will certainly outlast my life -- and my daughter's. In many (if not most) cases, it's likely that all extant copies will have vanished before they return to the public domain.

The Copyright Office web page says that after the comment period, they will:


...seek to facilitate further discussion through stakeholder meetings and, if necessary, additional requests for written comment. Based on this input, the Office will draft a formal legislative proposal for Congress’s consideration.

However, I see no indication that this work is continuing.  I am, though, heartened by the words of the Register of Copyrights, Maria Pallante, during Congressional testimony on Dec. 2, 2015, when she said:


...I want to underscore that copyright law is chasing an exponential increase in the way people create, distribute, and consume copyrighted works.

Let us hope the Copyright Office catches up AND begins to lead the effort in allowing more equitable use of copyrighted materials.
Posted by Jill Hurst-Wahl at 10:00 AM No comments:

In my end of the year cleaning - also known as the avoidance of grading papers - I found this draft blog post from the Computers in Libraries Conference, which I had never published.  As the saying goes, better late than never!

The library went through a realignment.  After the realignment, all of the departments overlap.  There are now departments on community engagement, learning experiences, customer service, access, youth services, IT and adult services.

They now do pop-up programming, rather than formal programming.  Pop-up programming is when the drop into the space with a quick program that the kids can participate in.  By not announcing it in advance, they can change programs on the fly.

BOOMbox receives new tools every three months for fabrication, design, etc.  it is a flexible space for flexible learning opportunities.  Once an item is removed from the room, it might then circulate for a while.  The space allows kids to try new things actively.

Skokie is using badges to help students demonstrate that they have met their learning goals.  Their first badging system was the Maker Master Challenge Badge, which was paper-based.  Then the transferred what they learned into a digital badge system.  The system they used to build their badging system was Captain Up, which was learned earlier this year.  While it received limited use, the feedback will be incorporated into a new system.

An upcoming program will be on growing things and hydroponics.  (Bloombox)

The BOOMbox is staffed by student volunteers and staff.

They are also participating in MOOCs, using a flipped classroom approach.
Posted by Jill Hurst-Wahl at 1:18 PM No comments:

In my copyright class, I have enjoyed talking about the sond "Happy Birthday" because it had been something that people didn't realize was still covered by copyright.  But now it has been set free and the narrative in my class will have to change!

What happened?  In short, a lawsuit that took more than two years. This is good news for businesses that have avoided using it.  Now they can sing it, play it, and have no fear (and make no payments).

More about this at:

And for fun, here are James Corden and Josh Groban singing songs that are in the public domain. It's 7 minutes long and worth listening through the end.

With 2016 just around the corner, this is where my travels will be taking me:

If you are at any of the conferences above, please stop me and say "hi".  If we can, let's grab a cup of coffee!

Below are conferences that I hope to attend this year.  ALA Annual and IFLA are not a definite; however, it would be shame for IFLA to be this close and to not go!
If I get to ALL of these conferences, it will be a very busy year.
Posted by Jill Hurst-Wahl at 9:30 AM No comments:

Last Friday, I spoke to one of the councils of the Manufacturers Association of Central New York on competitive intelligence.  Since I don't like for a good handout to go to waste, I'm placing it here.  Competitive intelligence is what I did as a corporate librarian and then when I started Hurst Associates, Ltd.  Now that I'm an academic, I like talking with students about this work.  It is not something the initially consider when they think about library science.