Terry Hart, who writes Copyhype, has created "A Copyright Review Bibliography."  Paraphrasing Hart, this bibliography is meant to highlight some of the "large body of literature that pokes and prods at copyright law, asking many of the same questions that Rep. Goodlatte posed" in her opening statement last Thursday during the House Judiciary Committee Subcommittee on Courts, Intellectual Property, and the Internet hearing on “A Case Study for Consensus Building: The Copyright Principles Project.” This is not your classic bibliography, but it does provide a grounding for discussions around this topic...and is worth bookmarking.
Posted by Jill Hurst-Wahl at 10:00 AM 1 comment:

Will copyright become extinct in 2020?

I found this infograph through Twitter. The image is from BusinessInsider.com and the original content is from NowAndNext.com. While the note says to not take it seriously, we have to wonder if copyright will - at some point - become "dead" because it no longer serves a need. 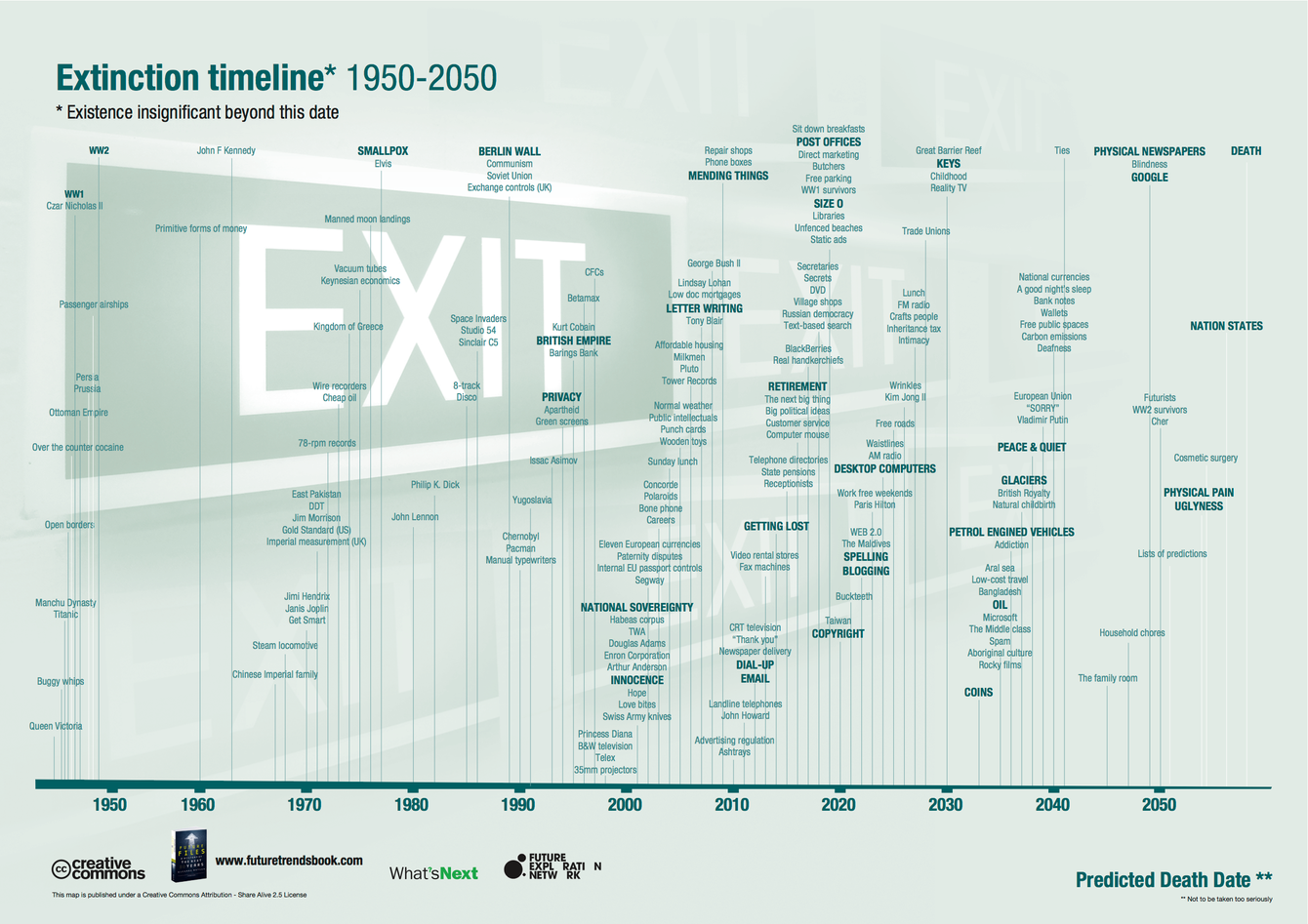 The Cost of Attending a Conference 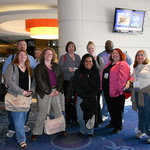 Last Friday, I participated in the T is for Training podcast, Episode 118, which has been entitled "Roll Your Own Conference." During the hour, we got on the topic of the cost of attending a conference. (You can listen to it below.) We recognized that some library conferences can be expensive (e.g., national and international conferences), while some regional and local conferences may be seem to be priced "just right." We also recognize that the cost burden for conference attendance may be shared both by the participant and that person's employer. However, some employers may be unwilling or unable to contribute towards a person's continued professional development, which will put the entire cost burden on the participant.

I, and others, preach the fact that we need to invest in our own professional development.  In order to do that, we need to plan in advance and, often months in advance.  Last week, I did my travel budget for the next twelve months and combining that with recent conversations, has caused me to do this blog post and lay out some cost cutting measures - and other things to consider - when planning for conferences.

What are the costs involved in attending a conference? 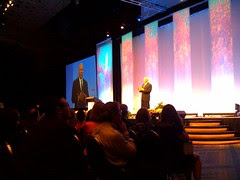 If you are planning for conferences, where all of the details are not yet known, it is likely that you at least know the date and the city.  Use that basic information to create estimates for the information above.  You can find per diem estimates (hotel, meals and incidentals) for all U.S. locations on the GSA web site.  Non-U.S. per diem rates are available on the U.S. State Department web site.

How can you decrease the costs?  If you do the above for one or more conferences, likely you'll feel a little "sticker shock" over the expense.   At some point in time, we've looked to lower our conference costs and done some of the following: 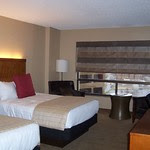 Hotel Cost:
Food Cost:
Other Ideas:
And...here is one idea that will help you, if you have the spunk to do it...put money aside every week in order to cover your conference costs.  Yes, once you've figured out the cost, divide that by the number of weeks until the conference, and start saving.  If you can't save the entire cost, consider how much you can save, where you can cut costs, and what costs you're willing to pay off afterwards.  We save for lots of things, so why not save for your professional development.

T is for Training: Roll Your Own Conference, 58 minutes

The Value of the LIS Degree

If you're a librarian in the U.S., likely you got pulled into the conversation started by Library Journal on the value of the MLIS degree (Master's degree in Library & Information Science).  This week, I'm involved in two follow-up conversations on that topic, which are available online.

First, Matthew Gunby - a recent MLIS graduate - and I wrote a joint blog post entitled "A Conversation on The Value of the LIS Degree."  Matthew and I recognize that this conversation has many sides to it, and we tried to select a "side" that we thought brought up some different ideas.

Second, Steve Thomas (Circulating Ideas) and LitTech's Emily Thompson and Addie Matteson had a conversation on this with Dave Lankes and I.  That conversation is becoming two different podcasts: one for Circulating Ideas and the other for LitTech. (In total, less than 60 minutes.)

The MLIS degree is a professional degree, accredited by the American Library Association. Doctors, lawyers, and journalists all receive professional degrees, so librarians are in good company.  It is a degree that aims to educate a person's first day in a professional position and ensure that person can stay relevant throughout his/her career.  While a person will likely need to engage in ongoing professional development, the MLIS should provide a base on which additional knowledge and capabilities can be built. 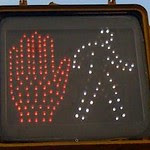 Relevancy - When I graduated with my MLS degree, my first job was in IT and not in a library.  Still the work I had done for my library school professors was what got me hired.  When I moved out of IT and became the head of a corporate library - and yes, that was my first professional library position - my classwork became immediately relevant.  Some became even more relevant when I became a digitization consultant and was dealing with ideas around information storage and access.  While others have been confused about the relevance of their MLS/MLIS degree, I have never been.  I could always see its impact on my life, even when I wasn't working in a library.

Yes, I've attended a great deal of professional development over the years, which has built upon what I learned in school.  I have figured that librarians never stop learning and, those that I hang out with seem to believe that it is true.  Getting the MLS, didn't make me think I knew it all, and heading a corporate library proved that was so.  And the fact that I did professional development didn't make me think any less of my degree.  Those workshops and conferences just added to my web of knowledge.

One hard part for me is looking at every LIS student and saying "this is relevant", when they don't see the relevancy yet.  It is also hard to look at an LIS professional and tell that person that the degree was worth getting, when the person hasn't fully seen its relevance yet.  For me, the keyword is "yet."  I don't know when the "yet" will occur for each person.  And I fear that some will never recognize the "yet" when it does occur.  They may see the degree's relevance in others, but not in themselves. They don't see that everything they do is different because of the knowledge that the degree gave them.  What they see instead is the cost of getting the degree both in time and money, and not its benefit on their lives.

Job vs. Passion - Bence Oliver, who spoke at the SU iSchool graduation convocation this last weekend, told the graduates to not get a job. Instead he asked that they follow their passion.  He recognized that obtaining a degree takes time and money.  He wondered, though, why anyone would waste that effort on just doing a job. Why not apply all that you have learned towards doing what you love?  We might see this as being unrealistic because there are bills to pay, including student loans.  However, as I listened to him, I wondered if what is missing from the MLIS discussion is indeed passion?  Did the degree help you follow your passion? If yes, then Oliver would say it was worthwhile.

A Never Ending Conversation - The one thing that I know is that this conversation about the value of the MLIS will never end.  Next year, some journal will write an article that will prompt it all over again.  What I hope is different next year is that some people consider how what they have learned has changed them and how that change has impacted their lives.  If even a few can focus on that, then the conversation will be a bit better.
Posted by Jill Hurst-Wahl at 11:30 AM No comments:

Helen Tibbo: Placing the Horse before the Cart: Conceptual and Technical Dimonesion of Digital Curation

Thanks to another student, Alicia Annal, for bringing this content on digital curation from Helen Tibbo to my class' attention. There is both a video of her talk (below) and a printed version of Tibbo's remarks.

Charter on the Preservation of Digital Heritage

I have not mentioned this document before and it is worth recognizing. The Charter on the Preservation of Digital Heritage was adopted in 2003 and includes 12 articles that cover:

If you are thinking about digital preservation, reading this - and perhaps discussing it with your colleagues - may spark ideas, concerns, or even a new initiative.