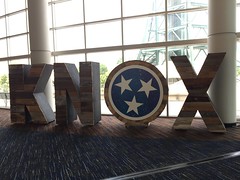 Last week was the Association for Library and Information Science Education (ALISE) Annual Conference in Knoxville, TN. This year's theme was "Exploring Learning in a Global Information Context." Part of the global context is diversity and a number of sessions connected with that specifically. A thread that crossed several presentations and posters was the information seeking behaviors within a community, however, that community is defined.


In the juried paper, "Information and Under-represented communities: LatinXs Finding InformaXion in Boston" by Monica Colon-Aguirre and Janet Caja Alcal, we learned of the information seeking behaviors of those who speak Spanish in the LatinX community. A 2015 Pew Research study found that LatinXs are less likely than other groups to know about the services offered by their public libraries. LatinX communities are the largest minority group in the U.S. and have complex information needs. Colon-Aguirre noted that LatinX populations are not monolithic, which means that we need to be careful about any assumptions we might make about their information needs.

Through 13 interviews, Colon-Aguirre and Alcal found that educational attainment and English language acquisition impact the use of library collections and facilities, and whether that use is for the person or for their child. For example, someone with a higher levels of education would use the library for themself, while a person with lower levels of education would seek services for their children.

Colon-Aguirre recommends that LIS educators prepare future professionals with the knowledge and skills to foster cultural competence. She also said we need to encourage students to acquire proficiency in languages used in our communities, other than English. She noted that LatinX communities are less likely to learn English than other migrant groups, mainly due to ethnic enclaves in cities around the U.S. Of course, the optimal solution would be to hire librarians that represent and look like the people in their communities.

Colon-Aguirre also recommended that libraries:
Besides being proficient in another language, library will want to build cultural competence. Cultural competence is a set of attitudes, skills behaviors and policies that enable a person to work effectively in cross-cultural situations.  Rajesh Singh (St. John's University) and Beth Patin (Syracuse University) have MSLIS courses on this and others may also exist. 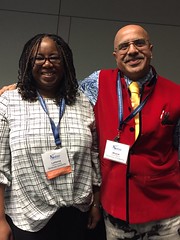 LaVerne Gray and Bharat Mehra were two of the panelists in the session entitled, "Chatman Revised: A Panel Reexamining and Resituating Social Theories of Identity, Access, and Marginalization in LIS."  Gray joined the SU iSchool in August, so she's been educating me about Chatman for a while! Mehra was her doctoral advisor and remains a collaborator.

Because I will not be able to fully articulate her work, I encourage you to locate information on Elfreda Chatman. Two articles, which I quickly found, are:

Rather than seeing the abundance of information within a community, Chatman saw a deficit. Rather than seeing external forces that created the confined community and questioning those forces, Chatman focused on the community as is. Mehra looks at Chatman through fresh eyes and is willing to question her theories, recognizing that doing so is uncomfortable for some.

For example, using Chatman, the knowledge of an Amish community might be seen as deficit, because the community does not reach outside itself to enhance what it knows.  Thinking of epistemicide, the external world seeks to destroy the traditional knowledge of the Amish people because it is not based on broader concepts and is not valued.

Did I Get it Right?


As I've written this, I have gone back through my notes and looked at relevant tweets. I'm thankful for those people who tweeted the sessions, because they captured ideas in real-time that were taking me longer to parse. However, now it is your turn. If you were at ALISE or are steeped in these areas, did I get it right? What should be added or corrected? Please leave comments and let me know.
Posted by Jill Hurst-Wahl at 9:00 AM No comments:

This rant is overdue: Skype interviews

Over the years, I have been on many search committees and some of those committees have conducted Skype interviews.  I have a love-hate relationship with Skype interviews (or Zoom or whatever video tool people are using). They allow the search committee to conducted a live video interview with a candidate, where each side can see the other.  When each side is competent at using Skype, it works well. But often they are not and that is a problem.

If you (a job applicant) will be giving a Skype interview, here are several things to consider:


Tips for the Interviewer

Read all of the tips above and apply them to your role as the interviewer. Yes, you need to be competent, too.

If you are conducting confidential interviews, you may want to use a personal Skype account, so you can control who can see the call history.  Why shouldn't you use a shared Skype account?  Currently, there is no easy way of deleting the history of Skype video calls.  If that shared account can be accessed by anyone, they may see who has been interviewed and that may be a problem.

This post has just been about the technology, but you - the interviewee or interviewer - need to pay attention to the other aspects of interviewing, too. Have you thought about the questions that will be used?  Have you rehearsed the questions or the answers?  If you are the job candidate, can you provide examples from your work history to support your answers? As the job candidate, can you explain why you are the best candidate?

In other words, you need to prepare for the interview. Please.


Posted by Jill Hurst-Wahl at 8:24 AM No comments: