Wayback Wednesday: Looking back over 2011

I cannot let the last Wednesday in 2011 go by without looking backwards over the last 12 months. What stands out amid the growing din of the "news"?

Google
HathiTrust
Georgia State
And...yes...those all (above) have to do with copyright.
Kenneth Crews (post), Clifford Lynch (post) and Henrik de Gyor 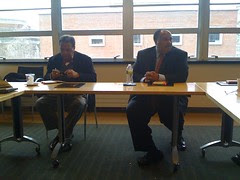 Posted by Jill Hurst-Wahl at 8:00 PM No comments:

Events: Upcoming conferences that may be of interest to you

I have not been posting regularly about upcoming conferences that may be of interest to you.  My apologies.  Here are a few that have recently appeared in my mail.

Carl Fleischhauer, a Digital Initiatives Project Manager in NDIIPP, has written two excellent blog posts on digital formats:
These are not blog posts to be read quickly, so take your time and follow the links in them.
Posted by Jill Hurst-Wahl at 9:48 AM No comments:


Cultural heritage organizations and others from around the world have developed a host of means to facilitate work during each phase of the digital content life cycle.  Many of these tools are open source, which permits broad community sharing.  A search for “digital preservation” on SourceForge, for example, currently yields over 30 programs.

Read the full blog post to see what the Library of Congress has contributed to this effort.
Posted by Jill Hurst-Wahl at 9:46 AM No comments:

May the holidays bring you joy, peace and love

No matter which holiday you celebrate during this December, may it bring you joy, peace, love, good health, and hope for the future! 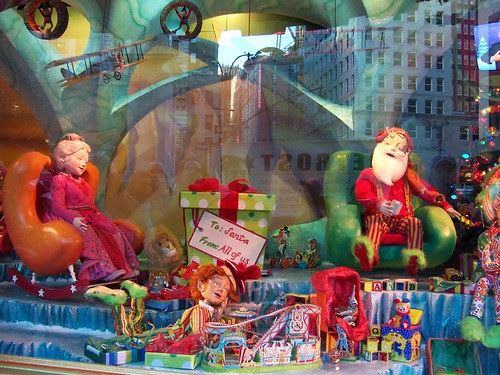 One of the Macy holiday windows from 2007.
Posted by Jill Hurst-Wahl at 9:00 AM No comments:

The words "library" and "librarian" 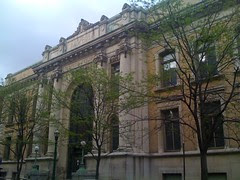 Over the past several years, I have been involved in conversations about the respect that the words "library" and "librarian" receive.  Tell someone that you are going to a "library" and that person will instantly have an image of what the place might look like and what its services might be.  The word conjures familiar images, and often those images do not fit our current reality.  Libraries rely heavily on technology, contain cafes, might contain studios where people can work on creative endeavors, and can be quite noisy - which all fly in the face of that traditional image we all have.

The same is true of the word "librarian".  Thousands of people around the word are professional librarians (with a masters degree), and they serve their users/patrons/customers/members/owners in a variety of different ways.  Often these people are not in physical libraries and they may not have the title of "librarian", yet they are part of the "library" profession.  Saying that they are a librarian communicates something about their skills and knowledge, as well as their values.  However, the word "librarian" can also put that person in a box that limits what people believe they can do.  Would you seek out a librarian to help you handle, organize, and analyze massive data sets?  Would you turn to a librarian for help in bringing an invention to life?  Would you put a librarian on the front lines in your operation, knowing that the person could access and analyze information quickly, and thus ensure that the front line team had the information it needed to make quick, accurate decisions?

Research conducted on behalf of the Special Libraries Association (SLA) during 2007-2009 showed that (and these are my interpretation of the results):
Which brings me to a question that was asked of Dave Lankes this fall:


so which is more important, the name ‘librarian’ or what librarians could accomplish...?

I must admit that this question made me stand still and think.  I have called myself a consultant, analyst, supervisor, manager, and professor...but have always considered myself at the core to be a librarian.  What if I totally stopped using that word; would their be a negative impact?  Could I use words that are more descriptive?  Could I use words that resonate better with the communities where I'll be talking about what my [library and information science] students can do for them?

And what if people said, "gee...that kinda sounds like a librarian?"  I could acknowledge it and then point out that what we do now is so much more than the image that comes to mind.

Finally, when you go into a doctor's office, the person has his degree on the wall. The fact that the person has a degree gives you some level of confidence. This isn't just someone who was hired off the street to provide medical services. This is someone who was trained and vetted. The person was selected by the medical group because of the knowledge that person had acquired starting in medical school. In the same way, our employers need to look for people to handle their data who have the right degree for that activity. Too often organizations think that anyone can do it, but we know that is not true. They need to seek out the people who have studied that activity and who are intent on making it their life's mission (just like our doctors).

I know...the words "library" and "librarian" are just words and how they are used or interpreted should not matter.  Sadly, however, it does matter and maybe not to you, but to a colleague that is job searching, a student that is graduating, or an organization that needs a skill and isn't sure where to find it.  In those and other situations, the words may hindering what is truly possible.
Posted by Jill Hurst-Wahl at 8:30 AM 3 comments:

From the Beyond the Book web site:


From the perspective of copyright, 2011 has been a year like so many others in the Digital Age. Suits and counter-suits over copyrighted text, music, film and video continue to fly in and out of court. The long-standing “Google Books” case is, for now, scheduled for trial in 2012, while the HathiTrust — a consortium of university libraries — has drawn a new lawsuit from authors for announcing plans to post online copyrighted texts that may or may not be “orphan works.”

A panel of IP experts and commentators offered their answers and insights into these compelling issues ... at the Newseum in Washington, DC. Maria A. Pallante: The 12th Register of Copyrights and Director of the United States Copyright Office; Cecilia Kang: National technology reporter for the Washington Post; and Victor Perlman: General Counsel, American Society of Media Photographers spoke with CCC’s Chris Kenneally.

Wayback Wednesday: Is every librarian a digital librarian?

In September 2010, I wrote a Wayback Wednesday on digital libraries.  Now I want to write another post on the topic, but with a different focus.

I see students learning the latest technologies and delving into database construction, etc., but who do not take digital library specific courses. Yet when they graduate can they call themselves digital librarians?

Or perhaps as hinted in the title of this post, the phrase "digital librarian" has outlived its usefulness.  Maybe it is time to admit that every librarian is a digital librarian.

What do you think?

Posted by Jill Hurst-Wahl at 8:24 AM No comments: