This past week in class, the conversation turned to information that is "born digital" and how it can be analyzed and used.  I attended New York Data Week last October, so my mind quickly thought of the visualizations that I saw.  Yes, when you get data into digital form - whether it is born digital or digitized - you can then analyze and display the information.  If you have not viewed any visualizations of large/massive data sets, take a look at these. 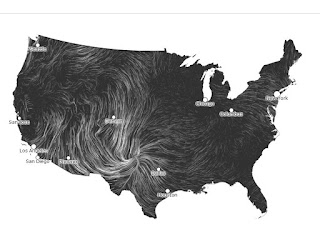 
Foursquare Check-ins in NYC During Hurricane Sandy from Foursquare on Vimeo.
Posted by Jill Hurst-Wahl at 9:30 AM 1 comment:

Earlier today, a group of SU iSchool students hosted an unconference event focused spaces and places.  40-50 public, academic and school librarians along with LIS students and faculty attended the event. From everything I saw, the event was a success!  Congratulations to Stephanie Prato (@scprato), Sarah Bratt (@SarahSbratt), Mia Breitkopf (@MiaBreitkopf) and Matthew Gunby (@MatthewGunby) for conceiving and delivering this event.

The topics discussed were:
Twitter didn't capture all of the ideas generated or conversations had.  However, looking back through the Twitter feed, here are some of the tweets of interest:

I can here a few people saying, "You didn't use Storify!"  True.  I'd rather go "old school."  However, Mia did create a Storify from the tweets, which can be seen here.

Addendum (9 p.m.): Two employees from Gaylord Brothers were also in attendance.
Posted by Jill Hurst-Wahl at 7:49 PM No comments:


The goal is to preserve one copy of every published work. The universe of unique titles has been estimated at close to one hundred million items. Many of these are rare or unique, so we do not expect most of these to come to the Internet Archive; they will instead remain in their current libraries. But the opportunity to preserve over ten million items is possible, so we have designed a system that will expand to this level. Ten million books is approximately the size of a world-class university library or public library, so we see this as a worthwhile goal. If we are successful, then this set of cultural materials will last for centuries and could be beneficial in ways that we cannot predict.

Read the article for more information on how the books are being stored, which I must admit is interesting.  The phrases "climate controlled" and "shipping containers" are often used together in my world!
Posted by Jill Hurst-Wahl at 9:30 AM No comments:

Starting this semester, Duke University faculty, students, and staff can request to have certain public domain books scanned on demand. If a book is published before 1923 and located in the Perkins, Bostock, Lilly, or Music Library or in the Library Service Center (LSC), a green “Digitize This Book” button will appear in its online catalog record.

The turn-around time will be less than two weeks.

This is a pilot project.  Pending the results of it, they may expand in order to digitize other materials on-demand.

This is a cool service!  Are there any other libraries doing this?
Posted by Jill Hurst-Wahl at 9:30 AM 2 comments:

Must it be correct to be true?

I tweeted that (above) from a session at the ALISE 2013 conference that was about the Tea Party and Occupy movements.  What does it mean, really?

We've all heard or said things that weren't exactly correct, but whose sentiment was correct.  It could be a misquote or even a made-up quote from someone.  It might be totally contrived like the image to the right.  The question is...if the sentiment is correct, does the "exactness" matter?

While this question was raised in talking about content produced by social movements, I find it interesting from the point of view of our digital archives.  We want our archives to be accurate, but does that mean that we want the content to be verifiable or true?  What if the sentiment was accurate, while the words were not?  Would we place these things in our archives for future access?  If yes, how would we label them?  Personally, I think the descriptions could be tricky, since it could mean understanding who create the information and why.

As I write this, I am also thinking of images that have been Photoshopped liked the one, several years ago, of the British royal family where they altered Prince William's smile.  Was the image accurate?  No. Yet is was an official photograph and has been archived as such, I'm sure.  I wonder if the metadata includes a note saying that William's smile is a fake?
Posted by Jill Hurst-Wahl at 10:00 AM 1 comment:

After several years of work (on and off), the Canadian Conservation Institute has released Technical Bulletin #30, "The Digitization of Audio Tapes" by Joe Iraci, Kimberley Flak, and me. We have attempted to put down in writing and pictures most of the things people need to know to do a more-than-merely-competent job of digitizing audio holdings.

Here is the abstract:

Many archives and heritage institutions possess audio tapes that are the only record of culturally significant information. Unfortunately, these analog audio storage formats have a finite technology lifetime. If the information is to remain accessible, it must be migrated to new technology. This Technical Bulletin provides information and procedures for digitizing cassettes and reel-to-reel tapes. It is intended to assist small to mid-size heritage institutions that lack the funds for professional digitization. Note that the procedures discussed in the bulletin are intended primarily for oral history collections; they will not capture all the fine details extant in high-fidelity recordings.

The English version is available for a modest fee (US$25) here:

The authors all hope that this will aide in the preservation of holdings where there is no funding available for professional transfers.

Posted by Jill Hurst-Wahl at 11:53 AM No comments: