Washington Declaration on Intellectual Property and the Public Interest


The Global Congress on Intellectual Property and the Public Interest, August 25-27, 2011, convened over 180 experts from 32 countries and six continents to help re-articulate the public interest dimension in intellectual property law and policy. This document records the conclusions from the Congress and is now open for endorsements and comments.

I just heard about this and so do not know what the Global Congress intends to do with it. Are they looking to affect law? If you have any insight, please leave a comment.
Posted by Jill Hurst-Wahl at 9:36 AM 1 comment: 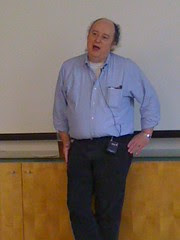 Clifford Lynch, executive director of the Coalition for Networked Information (CNI), spoke at Syracuse University yesterday.  Lynch's talk was entitled "The Changing Landscape of Scholarship: Implications for Libraries and Scholarly Communication".  He believes that you must look at the future of scholarly work first, then look at how that work will affect libraries.

A great deal of scholarly practice is becoming data and computationally intensive, and across all disciplines.  Funding agencies are increasingly requiring that data produced as part of a grant be stored, maintained, and often shared (even before the research is completed). This has led to new areas of study, including data curation, eScience and data science, as well as new jobs, etc.  However, it is not clear what the real need for data curation experts is.  Nor clear where they will or should reside. Where is an important question since we don't have a national effort in the U.S. to store research data.

Lynch did make an important distinction about two types of research data.  First, there is data that can be easily recreated.  Do we need to store this data in perpetuity?  Perhaps not.  Then there is observational data which can be difficult, if not impoosible, to recreate.  This data does need to be stored and maintained.

He described two used of research data.  The first is to support the original research as well natural extensions of thar research. The other use of data is as proxy data and you cannot predict those uses.  For example, data about high tides could be used by the shipping industry, but also could be used by environmentalists.  Since you can't predict its use, the whereabouts of data sets needs to be known and access available.

Lynch spent a long time talking about access.  When talking about big data, we all assume data that is digital, however, Lynch talked about the tremendous about of data - including specimens - that is not yet digital and that is very fragile.  Who is going to create the digital surrogates?  Where will the funding come from?

Universities sit on a tremendous amount of data that might be "hidden" in various departments.  The library might not even know where it all is.  Lynch believes that at some point various university offices will get involved in how data is stored, maintained and shared including the office of risk management and those that audit varous processes.

Near the end of the question and answer period, Clifford Lynch made the point that people outside of our research institutions cannot easily get to scholarly material anymore.  (He used the phrase "scholarly material" in a broad sense, including data, databases, etc.)  For me, that raised the question of how libraries will make scholarly information available to people are not part of their user-base.

Lynch mentioned that the UK had been a poster child for creating systems for storing data, but that funding shifts had harmed those systems.  He mentioned both  AHDS and JISC.  In the U.S., there isn't a natural focal point in order to build systems similar to the UK.

Lynch also touched upon:
Lynch would like to see people studying the "science of data" with theoretical underpinnings. He believes that archival practices are not enough in order to understand and handle the problems with scholarly data.  He does believe that libraries have the processes and mission that will lead them to attack the problem of data sharing and data curation.

Several of my students attended Lynch's talk.  Two mentioned being inspired by it and now being interested in knowing more about eScience.  They saw a vision of an optimistic future. One student heard in Lynch an air of pessimism.  Lynch, however, would say that he is neither an optimist nor a pessimist, but just a realist.
Posted by Jill Hurst-Wahl at 9:20 AM No comments:

Prudence Adler (ARL), Jonathan Band (policybandwidth), and Brandon Butler (ARL) have written a 17 page report entitled "Resource Packet On Orphan Works: Legal and Policy Issues for Research Libraries" which provides background on orphan works and their associated legal and policy issues, the University of Michigan’s Orphan Works Project, and other material that will allow people to understand the issues faced by Authors Guild v. HathiTrust et al. Quoting the report:

Recently, the University of Michigan announced the initiation of the Orphan Works Project. The focus of the Project is on US digitized books held by HathiTrust, a partnership of major research institutions and libraries working to ensure that the cultural record is preserved and accessible long into the future.

HathiTrust provides a variety of secure long-term preservation and, in some cases, access services to the nearly 10 million scans that resulted from Google Book Search and other digitization efforts by research libraries. Digitizing these works has made identifying and locating high quality sources of information—both copyrighted and public domain works—far easier, thereby significantly increasing the value of library collections in support of research, teaching, and learning.

On September 12, 2011, the Authors Guild, together with authors’ associations from Australia and Quebec and eight individual authors, filed suit against HathiTrust and five universities claiming that the making, storing, and providing access to digital scans of copyrighted works is illegal, objecting particularly to the Orphan Works Project.

One of the things I really like about this report is that it goes through the four factors of Fair Use for the materials being digitized by HathiTrust. The amount of detail is excellent, which makes it a wonderful example. (Looks like something I will need to assign as a reading for my copyright class.)
Posted by Jill Hurst-Wahl at 7:23 AM No comments:

The Sept. 2, 2011 issue of The Chronicle of Higher Education (p. A17) contains this article on textbook piracy. According the author, the created of this new web site - LibraryPirate - hopes "that a groundswell of textbook piracy would force publishers to bring down the prices of e-textbooks, which he sees as unfairly high."  What I find amazing is that LibraryPirate is being hosted in the Ukraine where it reportedly does not violate copyright law.

The good news about worldwide access is that it is worldwide (universal access).  The bad news is that disparities in the law can be exploited.

The article is in the print edition of The Chronicle but does not appear on the free section of its web site.
Posted by Jill Hurst-Wahl at 1:10 PM No comments:

The case of Tasini v. New York Times, which deals with the copyrights of freelance writers, was first settled in 1997.  Because of various appeals and rulings, the settlement was not final and:


On August 17, the Second Circuit Court of Appeals sent the parties in the long-running class action suit known shorthand as Freelance back to the drawing board, rejecting an $18 million settlement struck in 2005.

This article talked about the current status and what it means for:
If you have article databases that you or license, are a freelance author yourself, or are just interested in how this could impact Google, then take time to read this article.

It will be interesting to note what happens next...and when....
Posted by Jill Hurst-Wahl at 9:15 AM No comments: