What I learned about GSU's copyright case

I heard Phil Frankel, a Syracuse-based attorney, speak on Oct. 19 about the GSU court decision, which is now being appealed.  I don't think I can write a summary, but several things stand out to me:
Here is a link to the ARL issue brief on the case.  It seems to cover many of the points that Frankel made.
Posted by Jill Hurst-Wahl at 8:30 AM No comments:

This is off-topic for this blog, although some who are not my students, may find it useful.

In the iSchool, several of us are avid users of Twitter. We use as a way of staying connected to our colleagues, friends (professional and personal), and students.  Since some students are still acclimating to Twitter, this tutorial will help you become more proficient.

For many people, Twitter is replacing short email messages.  In addition, some are using it as a way of taking notes and immediately disseminating those notes to others.  You see this happen at numerous conferences and it is definitely one of the ways that I use Twitter.

How many people are using Twitter?  According to the Pew Internet & American Life Project, 8% of U.S. online adults use Twitter daily (May 2012). People are using it from PCs, laptops and their mobile devices.


Yes, you can change your Twitter name, but I would encourage you to select a name upfront that you want associated with you.

You are your Twitter name.  Now at conferences, it is not the business card that people want, but your Twitter name.  We might follow someone on Twitter during a conversation as a way of starting what we hope will be a long-term connection. - From Being Social, May 1, 2012

Please use a profile photo.  While the photo can be anything, if it is a photo of you, then people will associate your Twitter name and tweets with a visual of you.  That can be a real benefit!  For example, I've had people introduce themselves to me because they recognize me from my Twitter profile photo.

You will notice that some people have customized the background of their Twitter page.  This is not necessary.  However, if you get to a point where you want to do it, here are directions.

Finding people to follow can seem difficult at first.  The trick is to locate a few people that interest you, then check to see who is following them. You may find among their followers people that you also want to follow.  For example, you may want to look at the people I am following (or who are following me) and see if any are of interest to you.

What should I tweet? Tweet about things that are newsworthy.  That could be an ah-ha moment in class, an unanticipated traffic jam, link to a good article/video/web site, information from an event you are attending, etc.  If someone tweets something that you want your followers to see, yes, do re-tweet it!

Sometimes tweets are actually a conversation between two people.  While these can be done as public tweets, you may also want to consider sending them as direct messages (or DMs).

What shouldn't I tweet?  Do not tweet information that would allow someone to steal your identity or that you do not want misused (e.g., telephone number).  Do not tweet anything that you wouldn't want announcement in the newspaper about you.  It is also wise to not tweet about things like what you are eating or that your heading to lunch, unless it is the best meal ever OR you're heading to lunch with an extraordinary group of individuals.  As many people will tell you, they really don't care the mundane activities in your life.

How to I keep up with all of the tweets?  This is the hard part for people to learn.

First, stay in the moment.  Don't worry about what someone said yesterday.  That was yesterday.  Notice what is being said in Twitter now.

Second, setup Twitter lists. (See help here.)  Once you get above 100 followers or so, you need to create lists in order to organize the tweets that are coming to you.  I have setup many lists, including some that are for a short period of time.  Without these lists, I would never be able to know what is going!  For example, I have a Twitter list of 35+ people who frequently tweet about copyright.

Third, once you get into using lists, then you need to consider using software (app or web site) to help you.  Two that are frequently mentioned are Tweetdeck and Hootsuite.  I have used both and prefer Hootsuite (free version).  I use it on my mobile devices and through my browser.

Why do I like HootSuite?  From Being Social, Nov. 30, 2010)
Yes, I recommend that you use the free version of HootSuite. A few of you may find that you'll need to upgrade to the pro version, but most will be quite happy with what the free version provides.

I should also note that Hootsuite allows you to schedule tweets.   You may not ever care about doing that, but there are instances when it can be handy.

Will Twitter may a difference in my life?  Yes and let me give you a few examples to illustrate.
Is there more that I can do with Twitter?  Yes. Once you are comfortable with Twitter, ask your followers how they use Twitter and learn from them.  Undoubtedly, you'll find that people use it differently and some of those uses might be things you will want to try.

Finally...I must admit that when I first heard that colleagues were using Twitter, I didn't understand it.  It wasn't until a I was the 2007 Computers in Libraries conference that I was able to watch people use it and talk to them about its benefit.  I joined Twitter on April 28, 2007 and it has had a huge upside in my life.  According to How Often Do You Tweet?, I tweet on average 7.8 times per day, but I can tell you I will tweet much more than that during a conference!  Of course, there are also days when I might only tweet once.  That type of ebb and flow has been okay both for me and my followers.

If you are like I was, you may not see the benefit, but I encourage you to jump in.  Swim the waters of Twitter for several weeks and then see how you feel about it.  You may find that you can't quite live without it!

You can read the Honorable Harold Baer, Jr.'s decision at  http://www.tc.umn.edu/~nasims/HathivAG10_10_12.pdf

Since I know that commentaries and summaries written by others can be quite helpful, here are several that I have found:

Posted by Jill Hurst-Wahl at 12:27 PM No comments:

As a member of the board for the Special Libraries Association (SLA), I am part of a 9000 member association that welcomes information professionals from a variety of backgrounds. We acknowledge that some of our members - yes, even those with an MLS/MLIS - have moved away from "traditional" library positions and into positions in the larger information industry.

When I attend the Computers in Libraries conference, I am among library workers - some of which do not have an MLS/MLIS - who see how technology can be used in libraries of all sorts.  Some of the attendees are more like IT professionals than LIS professionals.

When I look at the career opportunities for those graduating with an MLIS degree, I see opportunities in all areas of the information industry.  I see them using their skills in organizations and corporations, in libraries, IT departments, marketing departments, and more.  In fact, let's be honest...our iSchools and some LIS programs recognize that we can't just prepare students to work in libraries.  We must prepare them for the places that need their skills.  We are preparing them to work in the information industry. 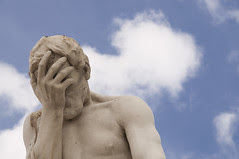 If we are educating future librarians, then it is easy to identify the potential employers with whom they should interact and the types of jobs that they should be seeking.  However, if we are educating them to be information professionals, then how do we connect them to employers that need the skills of these graduates but who recoil when they hear the word "library" (as in "I have a degree in library and information science")?  Do we tell our LIS graduates to market themselves as having an M.A./M.S. and to not mention LIS? Should they talk about their classes and skills without using the word "library"?

If the answer isn't that LIS graduates should downplay their degree, then is it that an LIS graduate must find the "right" potential employer who understands the degree?  And how does a LIS graduate find such an employer?  Is it just luck?

Here could be a place where SLA or another association could have a huge impact.  What if an association hosted a job fair at its annual conference and invited employers who are looking for information managers, etc., and marketed that job fair to graduates of LIS programs?  That could develop into a signature event.

I must admit that this topic is personal.  When I graduated with my MLS degree, my first job was in a corporate data center as part of the IT staff.  Yes, what I had learned and done in graduate school prepared me for that job. As everyone does, I also picked up additional skills on the job. I spent five years in IT before moving to the corporate library.  Over the years, my IT background has been important to my career.  I know that walking out of grad school and into a non-library position is possible, and I want it to be possible for everyone.

And now I need to turn this frustration into action and find ways of making it happen - not just for the few, but for everyone.  Will you join me?

Addendum (10/2/2012): While I likely do not agree with the entire premise of this book, this text from The Demise of the Library School: Personal Reflections on Professional Education in the Modern Corporate University

by Richard J.Fox caught my eye (p. xviii).  It seems appropriate to include here:


The emergence of the library and information science paradigm began the transition of library schools from a single disciplinary approach to a more multi-disciplinary knowledge base and, in an even more transparent fashion, from an orientation to the library profession to a plethora of information professions including librarianship.