This still needs to go through more approvals before being implemented. It is assumed this will be enforced beginning in 2021.  More information is available in this European Commission press release.
Posted by Jill Hurst-Wahl at 9:00 AM No comments:

Libraries have a People Problem 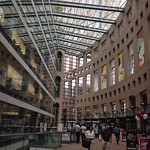 No, I'm not talking about community members.

Libraries often attract people who want to work in that setting (and perhaps that specific library), and who then stay in their positions for a long time.  We frequently hear of library staff, who have been at the same library for decades.  Some may have been in the same position for decades.  The good news is that this creates a stable work environment and a stable staff may be just what the library needs in order to meet its goals.

Yes, a stable staff is a good.

But a stable staff does not necessarily allow people to develop the skills they might need to move into a position which has more responsibilities.  For example, when the director retires, does the assistant director - or perhaps a branch manager - have the correct skills and experience to move into the director position?

Number of Libraries in the U.S.

According the Public Library Survey data, there are 17,400 public library outlets in the U.S. (including central, branch, bookmobile, and books-by-mail-only outlets). That is almost one for every 19,522 cities in the U.S. or nearly 6 in each one of the 3,031 counties in the U.S.

ALA estimates that there are 116,867 libraries in the U.S., including public, K-12, academic, government, and armed forces.  If they were distributed evenly across the U.S., that would be 38 in each county.

In some industries, it is common for people to move from organization to organization (or company to company) as a way of gaining more experience.  Those workers might be able to do that without changing geographic regions.  If you want to gain experience by moving to a different library, the choices in your geographic region may be limited, especially if you want to only work in one type of library (e.g., public).  go back and look at those numbers above. The choices could be further limited by civil service requirements. Thus gaining experience - or moving up in a library organization - may mean moving to a different region.  Given the wages paid in libraries, not everyone is able to move and take a new position, even if doing so mean gaining the knowledge, skills, and abilities which will lead to a better paying position in the future.

Yes, when someone leaves, there is someone available to take that person's place, although that person may not be totally prepared.  We need more people to be totally ready.  We need to somehow give more staff the experiences and training they need, in order to move into a new position when there is an opening and especially when that position is for a library director, branch manager, systems director, or state librarian.

Is There a Solution?

The solution clearly is not doing what we are already doing. That is not working.  Rather we need to transform our library hierarchies in a way that allow people to gain experience in different areas of a library, and with different levels of responsibilities. This would be akin to what some businesses do, in order to groom someone for upper management. Over the course of months and years, that person is giving different roles, responsibilities, and experiences which will give the person a deeper understanding of the organization and how it functions, as well as provide the person with the knowledge, skills and abilities to lead the organization in the future. In other words, the person is rotated through different jobs and departments. Giving someone this type of opportunity should not be done without accessing that this is the correct person to invest in.  Is the person committed to learning? Is the person interested in taking on a larger role? And the person should be assessed along the way, in order to know that this person is still someone who - after the effort is done - will be able to lead the organization. Perhaps, instead, the person will be a mid-manager (instead of a library director), where the training will still be of value.  This actually means training multiple people, because it could be that some will not complete it or will still not be ready for a leadership position.

That idea works in an organization that is not governed by civil service and in an organization where there are a variety of different roles.  For smaller libraries, perhaps there could be job sharing or job swapping.  Imagine swapping with someone at another library or being able to share a more challenging position (even at another library)?  That might be hard to pull off, but it could help build better staff and people who are ready to step into bigger roles.

As for civil service, I am not an expert on it and so cannot think of a way of giving people these types of opportunities in that environment.  I would hope it would be do-able, but it might require more work upfront to create an environment and structure for it.

Are there other solutions? You might have one (or two) and I hope you'll leave a comment to let us know what it is.

Yes, libraries have a people problem that needs to be fixed.  Since our future library leadership depends on having a good pipeline of people, let's work on a solution now!