The year 2019 is coming to a close. Every year seems busy and often too busy. While I think of things I want to blog about, frequently I find I don't have time to do the posts.  I hope that might change at some point in 2020.  For now, here is a rambling look back at 2019 with some new thought thrown in. 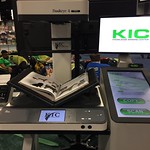 I have not spent much time this year thinking about digitization outside of the ALA Annual Conference (post). However, I have colleagues who report occasionally about their continued digitization efforts and I am pleased at the progress they are making. With moves towards augmented reality (AR), it is likely that our digitized material is and will be integrated into some of them. What is augmented reality? According to Wikipedia:


Augmented reality (AR) is an interactive experience of a real-world environment where the objects that reside in the real world are enhanced by computer-generated perceptual information, sometimes across multiple sensory modalities, including visual, auditory, haptic, somatosensory and olfactory. AR can be defined as a system that fulfills three basic features: a combination of real and virtual worlds, real-time interaction, and accurate 3D registration of virtual and real objects.

Actually, a quick search shows that there are already historical sites using augmented reality, such as James Monroe's Highland in Virginia. Are they including digitized materials? That I cannot tell, but I hope they are.

The other area, related to digitization, worth noting is the need to provide more digital materials to support online education.  That includes ideas like controlled digital lending, which was also a topic at ALA (post).  This is an area where our needs are moving quickly. We need to have the correct laws, licensing, guidelines, etc., to support this trend. 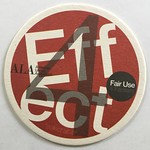 Rather than looking back, I want to look forward. January 1, 2020 will mark the second New Year's Day in a row where copyrighted works will enter the public domain due to their age.  In celebration, Lifehacker has published These 1924 Copyrighted Works Enter the Public Domain in 2020.

More information on Public Domain Day can be found in Wikipedia.

Over two year ago, I joined the Board of Trustees for the Onondaga County Public Library (OCPL) System. Quoting our website:


OCPL is one of 23 public library systems chartered by the Board of Regents of the State of New York. It operates the Central Library, nine Syracuse city branches and two satellite libraries, and 21 independent libraries in suburban Onondaga County.

These libraries serve a county population of 461,809. Within the City of Syracuse (population 142,749), the library users include 30.5% of the population, who lived below the poverty line in 2018.  One of the services OCPL has expanded this year, with funding released by our County Executive, is technology backpacks which can be borrowed for people to use at home (or elsewhere).  Each tech backpack includes:
These have been deployed across the county based on concentrations of poverty. 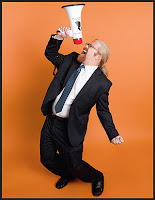 Among the other good news at OCPL is that we have a new executive director coming in January 2020.  Christian Zabriskie is well-known in some circles for his work in Queens and Yonkers (NY), as well as co-founding Urban Librarians Unite (ULU). In 2012, Christian was named a Library Journal Mover and Shaker. Recently, he and Lauren Comito, his ULU co-founder, were named Library Journal's Librarian(s) of the Year 2020.

My personal OCPL good news is that I am becoming Board president in January.  This will put all of my library knowledge, and ability to get work done through others, to the test and I'm looking forward to it!

Our public libraries are for everyone, including people with all different abilities and backgrounds.  They are most important to those in marginalized communities, whatever "marginalized" may mean in that context. The question every public library should be asking is what it can do to be of service in those communities. Once asked, then the library needs to talk with members of that community to figure out the answers. The library should not jump to conclusions, because that could mean that the library is doing what it deems to be correct, rather than what the community needs.

Many groups are focused on serving the poor in our communities and there are some specifically focused on raising up the voices of the poor. The Poor People's Campaign, started by Rev. Dr. Martin Luther King Jr., is one of those groups that is working across the U.S.  If you are a public librarian, what groups are working with those in your community who are living in poverty? Who is advocating for the poor?  What civic engagement activities can you and your library do to make a positive change in your community, in regards to poverty?

There are other issues in our communities: the opioid crisis, racism, homelessness (and home insecurity), the perpetually unemployed, etc.  These issues may have been glossed over by your news media, but they tore at your community in 2019. What can your library do to help?

One of the things that is happening around us is the increased amount of "gig work" that is occurring. Gig work can be defined as, "...income-earning activities outside of traditional, long-term employer-employee relationships."  Gig work impacts how we use technology and information.  It is impacts how space is used in our communities, including our libraries which offer space for people to work and meet, as well as access to technology.

This year, I heard Dr. Steve Sawyer give a talk about his research in progress related to gig work.  What stood out to me was the infrastructure - hidden to me - that has been created to support knowledge workers, who do not have a corporate office.  For a growing number of people, there is no office waiting for them in a corporate office building. Rather they are given the "flexibility" to work from home or at another location which suits them.  Sawyer noted that corporations used to provide offices, technology, and support, but now workers must acquire those things themselves (to varying degrees). Yes, a business may provide some tech support, for example, but because the person is not located where the support is, the person may need to do most of the tech support themselves.

There are a growing number of coworking spaces in our communities. You might not know about them, because you're not looking for them. If you've heard about one, you likely thought it was an aberration, but it's not and we're beyond the trend phase of this. If you know nothing about this, this article from ChargeSpot will be helpful.

If you are working in a library, how is your library supporting gig workers? Think about knowledge workers and those in other parts of the gig economy, like Uber and Lyft drivers. If there are coworking spaces in your community, are you interacting with them? Do they see the library as a resource?

Steve Sawyer is interested in specific aspects of the gig economy, which is not what I took away from his talk! (Sorry, Steve.) A paper of Steve's, with three collaborators, is available on ResearchGate.  That paper is, "Platformic Management, Boundary Resources for Gig Work, and Worker Autonomy." I know that he has other writings on this topic, which you can find through various databases.

T is for Training

I'm mentioning this, because I rarely do on this blog. In 2008, Maurice Coleman started a twice monthly podcast called T is for Training. The podcast is focused primarily on training (in and outside of libraries) and technology, although we focus on other issues.  I've been involved in T is for Training since its start.  It has changed over the years, because nothing can stay exactly the same. Who is involved has changed as well as, in 2019, when we record. We've also become closer colleagues and friends. There is nothing like a twice-monthly hour-long conversation to help create a close community!

T is for Training episodes are available on a variety of different podcast platforms. The website includes information on when we record as well as show notes. There aren't transcripts of the episodes, which means this podcast is not fully accessible. The show notes do capture the topics discussed and often a long list of resources mentioned.

The Best Tool of the Year 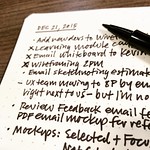 I've written before about the bullet journal method of staying organized and focused. This method grew into the most important tool for me this year.  With the number of committees I've been on, etc., my bullet journal has become by trusty companion. Yes, better than the previous work journals that I have kept. In a increasingly digital work, I think it is telling that the best tool for me remains paper.

And so this is my year in review!  I hope 2019 has had some bright spots for you.  May 2020 bring you the opportunities you have been working towards!

Happy New Year!
Posted by Jill Hurst-Wahl at 9:00 AM No comments:

It is the end of the year and people are publishing wrap-up stories of 2019.  Here are two focused on copyright:

Posted by Jill Hurst-Wahl at 10:31 AM No comments:

The Library Pros podcast interviewed Lee Rainie at the Long Island Library Resource Council conference.  Their description of the 40-minute episode is:


Part 2 features Lee Rainie, the Director of Internet and Technology at Pew Research. If you live in Libraryland, then you know how important Pew’s statistical analysis is to the future of libraries. Lee Rainie, a proud Long Island native, took some time to talk about what libraries are doing well and what the future holds for libraries based on the historical statistical analysis. Speaking with Lee was a pleasure and we thank LILRC for making him available to us!

I have been fortunate to hear Lee Rainie speak many times and I always learn something new. What is new in this interview, for me, are his thoughts about the future focus of libraries.  That begins around minute 16 in the podcast.

Thanks to Chris and Bob - the Library Pros - for their continued podcasting efforts!
Posted by Jill Hurst-Wahl at 1:53 PM No comments: 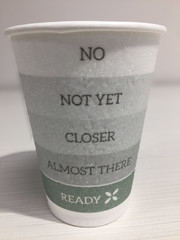 It is amazing to think that the year 2020 is nearly here!  I remember when people were panicking over the change from 1999 to 2000.  Well, as 2020 approaches, this is my travel and presentation schedule for the start of the year.

Right now, I only have one conference on my schedule for the first part of 2020.

There is definitely more to come later in the year.  If you are interested in discussing a workshop for your organization, contact me.
Posted by Jill Hurst-Wahl at 9:00 AM No comments: