Among the 701 exhibitors at the ALA Annual Conference were several digitization vendors; however, I only took photos of two of the booths.  Interestingly, there is no way to search the exhibitor list on the ALA website to locate all of the digitization vendors. (Trust me, I tried.)  With that as a introduction...

What stood out to me?

Second, the technology is changing.  Scanners are getting bigger.  Complete systems are available for use by library patrons.  Digitizing is being integrated with systems to help students study and help community members create their own works (e.g., photo albums).

By the way, if you have not looked at digitization equipment in a while, don't make decisions based on your old knowledge.  While no one is screaming this from a mountaintop, you should know that these vendors are continuing to develop their technology and systems. They are not standing still.

Third, speaking of complete systems, DLSG offers the Knowledge Information Center, which allows patrons to scan materials and have the output in several different formats, including searchable PDF, JPEG, MS Word, KIC Study System, and others.  These complete systems allow users (patrons, students) to control what they digitize and how they are going to access the material.  While I've mentioned DLSG,  I'm sure other vendors are offering similar technology.

Fourth, what vendors display at conferences isn't always what they have available on their websites.  DLSG had two interesting publications at their booth:

While I cannot find these publications on the Internet, these seem to be similar (but not the same) to some of DLSG's online content, such as this about using KIC in K-12 education.  This is a reminder that if you're interested in a company or technology, it can be good to pick up material from their booths, even if you don't talk to anyone.  What you pick up may be a unique and helpful marketing piece.

I should note that I skimmed the 701 exhibitors, rather than taking a deep dive into any particular area.  I did not have as much unstructured time as I would have liked, and so did not really spend as much time in the exhibit hall as I likely should have. The time I had was spent getting a feel for the entire exhibit hall, going to a couple specific meetings, talking to library colleagues, and resting my feet.  (Thanks to those companies that had seating available that could be used without feeling that a marketing pitch was eminent.)


Below is a photo of the SMA booth, which contained large format scanners. There are also three photos of the DLSG Knowledge Information Center (KIC) booth, which was massive. 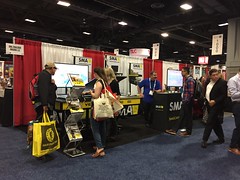 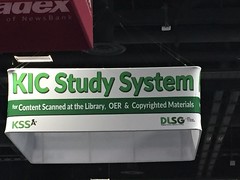 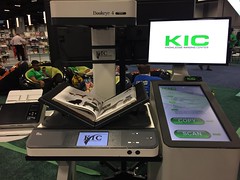 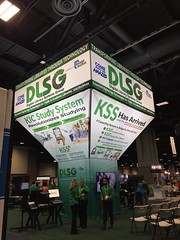