Over the weekend, I helped to team teach a course for our new iSchool graduate students.  Part of the focus (direct/indirect) of the course was to get students out of the comfort zone and to get them to think differently...even innovatively.   Innovate thinking occurred most in what they presented and how they presented.  Along the way, though, there was at least one new product idea, and that was very cool!

Every cultural heritage organization wants to do things differently, yet many find their roots grounded in a way that inhibits innovation.  Those roots might be how the finances are done, how performance reviews are given, or just how success is measured.  Every boss - and every agency that gives a grant - wants to see success.  Success allows for fist pumping, chest bumping, and a line on your resume.

I remember hearing Chris Hughes speak, who was one of the co-founders of Facebook.  They had known success and everything they were touching was turning to gold.  Recently, Facebook has run into some challenges.  The company issued stock and that stock price hasn't done so well.  Suddenly Facebook is tasting what must feel like to fail (even a little).  Failing now must feel quite odd.  You mean everything touched doesn't turn to gold?  Now what do they do?

Being innovative requires taking risks.  While you can take calculated risks - and try to mitigate the effect of a risk - when you risk, you take a chance on failure and we don't like to fail.  Not only don't we like it, we don't all know how to learn from our failures.  More importantly, we don't know how to reward people for failing.  Yes, reward. 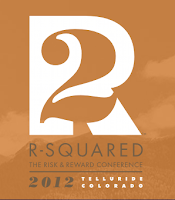 On September 8, I'm heading to Colorado to a library conference focused on being more innovative.  The Risk and Reward Conference (or R-Squared) has attracted several hundred people who are interested in thinking differently. Imagine going to a conference not to learn how to do what you already do better, but to learn how to change your mindset, your paradigm, your ability to take risk.  That's what we're doing.

From what I've experienced in the past, risk taking doesn't actually require learning lots of new things.  Instead it means saying "yes" more.  It means looking for the possibility in every idea.  And it means not mourning success that never comes, but reveling in knowing that you have learned.  And remember - "If at first you don't succeed, try, try again."  I know there is more to being a risk taker and being innovative, so I'm looking forward to three days immersed at R-Squared.

As I look at my students, I see people who want to succeed.  As they think abut what success is, I hope they will consider  the life of fictitious librarian Emily Skinner (video below), who risked and lived a full life.  She learned new technology, tried new sports and hobbies, acquired new academic degrees, and continued to love.  You don't see her failures or her struggles, but you know that she must have.  There were surely tears and times of sorrow. What you see, though, is clearly that she continued to risk and that there were rewards.

Posted by Jill Hurst-Wahl at 9:36 AM No comments:

The 67-minute video of this CNI Project Briefing will be of interest to librarians, those involved in digitization, and Dead Heads alike.  Very interesting to hear them talk about how they acquired content, how it was processed, etc., as well as how they are crowdsourcing some of the information.

Description: The Grateful Dead Archive (GDA) at UC Santa Cruz represents one of the most significant popular culture collections of the 20th Century and documents the band’s activity and influence in contemporary music from 1965 to 1995. At CNI’s spring 2012 membership meeting, UC Santa Cruz University Librarian Virginia Steel and Project Manager Robin Chandler discussed the particular challenges of merging a traditional archive with a socially constructed one.

In 2011, Debra Schiff did a series of video interviews with Peter Hirtle.  Peter talks about EAD, partnerships, risk (copyright) mitigation, and more.  Since he is always someone worth listening to, here is a link to Schiff blog and the videos.
Posted by Jill Hurst-Wahl at 10:00 AM No comments:

Glad to see that ASIST recorded the sessions from the Research Data Access & Preservation (RDAP) Summit and have made them available. The longest video is 30 minutes in length, with many being in the 10-20 minute range.

To see all of the videos, go to:

Here are links to individual videos:
Posted by Jill Hurst-Wahl at 9:00 AM No comments:

Depending on what circles you travel in, you've been hearing about "big data."  This has become the rage; grabbing headlines and creating its own conferences.  The fact that we have been able to create digital information - even through digitization - has laid the foundation for big data.

What is big data?  Big data is not the spreadsheet on your laptop.  It is data that is too large to handle, store, analyze and preserve without specific tools.  Michael Chui, a Senior Fellow in the McKinsey Global Institute, noted that in the United States, the average company with more than 1000 employees (in most sectors) have more data than the Library of Congress.  Companies that have a good IT and information infrastructure are better poised to capture the value from this data.

If you are a special librarian working in a corporation, likely someone is talking about big data and making decisions about how to handle it.  Are you a part of that conversation?

The same is true for academic librarians.  Some agencies are mandating that grant recipients make available their research data.  Likely there are specific conversations occurring about this that you should be including in.

For many librarians, the big data at your fingertips is your circulation data or data created when your databases are accessed.  The conversation you need to have is with your software suppliers.  Are they creating tools that will help you analyze this big data?

This McKinsey podcast (18 min. MP3) will provide a good overview of big data and help you understand why it is important.  Yes, the entire podcast is geared toward business.  That's okay.  In fact, more library and information science professionals are pursuing working with big data in businesses, so this will give you an idea of why.


The amount of data in the world is exploding. Companies and organizations capture trillions of bytes of information about individuals, customers, suppliers, and operations. Meanwhile, millions of networked sensors are being embedded in the physical world in devices such as mobile phones and automobiles, sensing, creating, and communicating additional data. This so called "Big Data" has the potential to be aggregated, analyzed, and used to generate concrete insights and inform decisions. A recent study developed by the McKinsey Global Institute examines the potential value that big data can create for organizations and sectors in the economy, and explores what leaders of organizations and policy makers need to do to capture that value. McKinsey's research on Big Data is discussed by Michael Chui, a Senior Fellow in the McKinsey Global Institute who is based in McKinsey's San Francisco office.

What copyright textbooks do I use in class?

While at the SLA Annual Conference, I couple of people asked about the graduate course I teach entitled "Copyright for Information Professionals" and which textbooks I use.  So...for them (and you), here they are.

The required textbook is:

Additional readings are taken from:

Posted by Jill Hurst-Wahl at 9:10 AM No comments:

ARL Publication: Special Collections and Archives in the Digital Age

Washington, DC-The Association of Research Libraries (ARL) has released a pre-publication version of Research Library Issues (RLI) no. 279, which is devoted to legal concerns and evolving professional practices around digitizing special collections and archival materials.

ARL member libraries have embraced digitization-performed in-house or through commercial vendors-as a critical strategy to increase access to their unique collections. This issue of RLI includes a model digitization contract for use with outside vendors, as well as model "deeds of gift" that can secure permission from rights holders to make donated material accessible on the web. Finally, the issue presents a critical essay by Kevin L. Smith, Director of Scholarly Communications at Duke University, on a new way of thinking about copyright and risk management in digitizing special collections.

The complete table of contents with links to the articles follows:  [Update 04/16/2020: The URL for this publication is https://publications.arl.org/rli279/1.  You can then navigate to the various articles.]

The pre-publication version of Research Library Issues no. 279 (June 2012) is freely available from ARL Digital Publications.
Posted by Jill Hurst-Wahl at 9:30 AM 2 comments:

The Digital Public Library of America has received a $1 million award from the National Endowment for the Humanities (NEH).  The money will be used to help make library materials from across the nation freely available to anyone online.  In addition, funding "would also free up resources for local libraries to focus on community needs and activities catering to neighborhood kids and adults."  For more information read the article in InnovationNewsDaily.