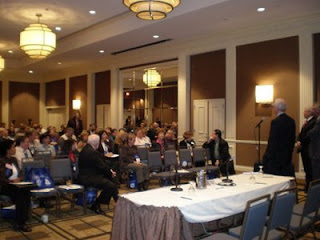 On Friday, I was able to attend two events at the New York Library Association annual conference where the future of library funding in New York State was discussed. The speakers were:
Introduced was Bernard A. Margolis who will assume the position of New York State Librarian in January 2009. Among the 100+ people in the audience were staff from the State Library, representatives of various library consortia, and members of the Regents Advisory Council on Libraries (Gerald Nichols, Sara Kelly Johns and myself).

Notes below are grouped by speaker and are not a transcript. Some are just sound-bites. 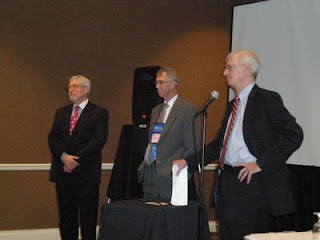 Thanks to Sara Kelly Johns for allowing me to use her photos.

Jill, thanks for such a thorough review. I think everyone knows libraries are valuable. This panel seems to have spent a lot of time preaching to the choir. The fact remains that NY libraries are going to have funding cut, just like every area of the budget. What can you expect when there's a $40 billion shortfall? I would have liked to have seen from this panel an honest assessment as to what this inevitable funding cut will mean to libraries in NY.