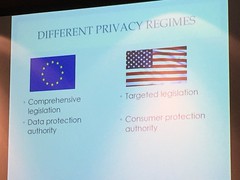 In the US, privacy is often controlled by the Federal Trade Commission.

Is US privacy law adequate when dealing with data sharing across country boundaries.  People in other countries are not covered by the Fourth Amendment:


The right of the people to be secure in their persons, houses, papers, and effects, against unreasonable searches and seizures, shall not be violated, and no Warrants shall issue,but upon probable cause, supported by Oath or affirmation, and particularly describing the place to be searched, and the persons or things to be seized.


This conflict is relevant outside of the US and Europe.  Many countries has adopted the European model.

How to think about this conflict?  One way of thinking about it in terms of economic competition. 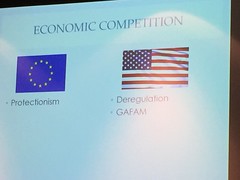 In Europe, the privacy regulations are seen as protectionism. 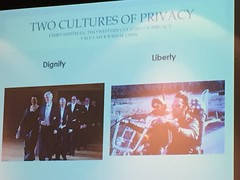 There is a long tradition in Europe of reputation and honor; your public face.  This was a right of the noble classes, which became a right of everyone.  It became a human right.  Each has a right to personal dignity.

In the US, we got rid of the monarchy.  We believe that we have the right to make decisions free of state interference.  Our anxiety is that the government would get a hold of all of our private information.  We do not want an overbearing government in our private lives.

In the US, we don't want the government to limit what we can know.

How dose resolve the conflict over privacy?  Both come out of a western tradition.  Can we blend dignity with liberty?  Perhaps there is something in the Universal Declaration of Human Rights.

What about intellectual privacy? There is a book on that. 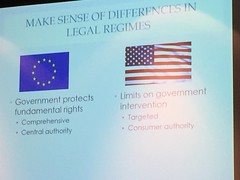 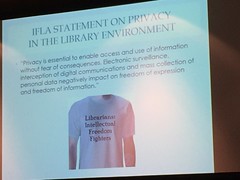 The privacy of library users is shrinking.  The private information of individuals, whom a library user might be researching, may be increasing. 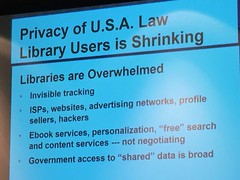 Areas affecting privacy:
In the US, privacy laws are at the state level.  Some were passed in the wake of the Freedom of Information Act.  Laws in 48 states, the District of Columbia, and attorney general opinions form the basis for this.

Some states have laws about digital book services.  There is a new law in Delaware, for example.

Legal research itself is part of the client-lawyer confidentiality. 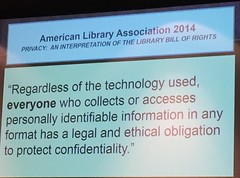 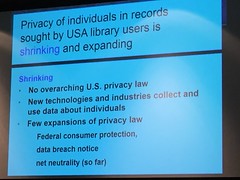