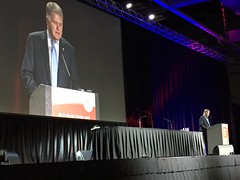 David Ferriero spoke about open government from the local, national, and international perspective.

The National Archives (NARA) opened its doors in 1935.  It supports all three branches of the U.S. Government.  It has 33 facilities across the country.  It is an archive, library and museum combined.

The National Archives plans a role in the President's open government agenda.  Openness includes transparency.  Transparency also means that government does not have all of the answers.  Ferriero wants to tap the thoughts of those outside of government, because those people may have answers that the government needs.

Included in getting more people invoked is having user generated finding aids.

These plans must be made info a cohesive national plan.  It is this that can be a model for others.  More than 70 countries have made commitments to make their governments more open and accountable.

The last national action plan for the US was released in October  2015.

The five commitments of the US that the Archives claims ownership:
Ferriero encourages more governments to embrace transparency, participation, and collaboration.  He also encourages IFLA participants to exchange information about their open government efforts.