We need each other.  People come to Wikipedia first and Wikipedia needs libraries to help ensure that it means the needs of our communities. 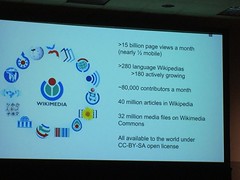 There are downloaded versions of Wikipedia for those without Internet access. Also used in K-12 settings.  There is a Wikipedia medical app for android devices.

Wikipedia runs on volunteers and references.

They used the Wikipedia page on chicken eyeglasses as an example.  Yes, this is a real page.  In contains many footnotes.  Every citation needs to be verified.  All facts should be footnoted. References need to include offline materials.

Articles are generally written by white males from wealthier areas of the world, who understand how to do research. 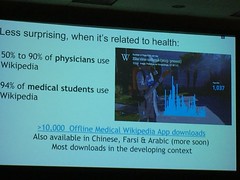 One problem they have on citations is the pay wall.  60 of the leading publishers in the world give Wikipedia IDs so that the editing community can improve the quality of Wikipedia.  There are checks and balances to help editors know when content is being changed and to note what may be incorrect. 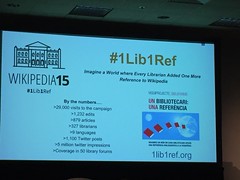 #1lib1ref - trying to get librarians improving the references in Wikipedia. It will occur again in January 2017.

What are the opportunities for libraries to engage Wikipedia s part of improving access to the world's best information?

As students use Wikipedia, they need to learn how to evaluate it critically.  No source should be taken at face value.

Libraries are increasingly becoming the place where we document the local community.
Libraries are hosting events to document local culture.
Cultural heritage is being added to Wikimedia.
Invite photographers to take photos of what is unique about your community.  Wiki loves monuments became the largest photography contest in the world.  Wikipedia is a repository for cultural heritage.

There are edit-athons.  For example, Art+Feminism.  Only 16% of biographies are on women. These edit-athons need to be multi-lingual and multi-cultural.  The community that has done this the best is the network of public libraries in Catalonia (Spain).

What if we trained all public librarians to edit Wikipedia and to engage others in this?

They wanted to expose their content to a wider global audience.


She showed a page that they have worked on.  The number of references has pushed Wikipedia to change.  Up over 1000 references on one page!

They have been training other librarians in Australia to edit Wikipedia.  There is an ALIA training course. There is also a training manual developed by the State Library of Queensland.

One of the things they did was to create guidelines for staff, in terms of editing. 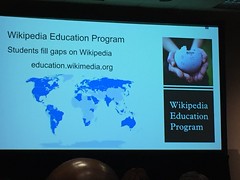 Wikipedia Education Program (See photo)
Wikipedia encourages students to do literature review. This gets students to write for the public.  There are 40-50 education programs at universities and in other arenas (e.g., senior citizens).

The paper is at Http://goo.gl/f0Fluc

How do we get faculty to accept Wikipedia?  Jimmy Wales said that if you're in college, you shouldn't get citing any encyclopedia.  However, we should acknowledge someone's honesty and then turn it into a teaching moment. As students edit Wikipedia, they get better at defending their use and talking to faculty about Wikipedia as a source.

There are journal articles on wikipedia's role in academia.

Question about access to references behind pay walls.  The most important thing for me is to get editors to have access to content, which then the editor can summarize.  Two initiatives they are working on are:
- connecting people to the source in their library. This is a complicated and thorny problem.
- working with an OA bot to search a page, which will check citations against open archives and add that link in the citation.  A green lock will signal that it is available in an open access site.

Noted that ISBNs in Wikipedia link to WorldCat.

They do have a bias toward open access, web sites and open newspapers.  People tend to cite what they can easily access.

Most of the media articles in Wikipedia are hard and not written at a sixth grade level. So?  They have a policy about avoiding jargon, but hard to enforce.  Wikipedia is a heavily cited medical resource.  They now that much of their technical content is too advanced.

Content in different languages may not be the same on the same topic.  How does Wikipedia promote other interpretations?  This is complex.

There are 285 wikipedias. Each language community is autonomously organized. In order to make information better across languages is to improve search and to have a language independent link, open and structure database.  (See photos) 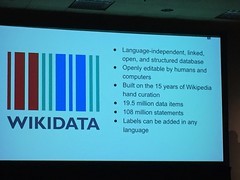 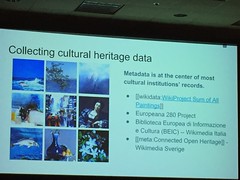 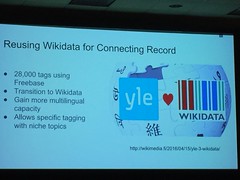 Bilingual editors are their most valuable editors, because they can be a go-between between two articles on the same topic.

They do want cultural independence for language communities.

Ethical issues in using Wikipedia - editing Wikipedia - as part of their jobs?  Conflict of interest.  It can be important to have guidelines for staff that you can point to, if there is a question. One library is focused specifically on editing things related to their collections, which may not be controversial.  Doing this rather than talking about their institution.

Wikipedia has loose rules, which you need to understand.

Can library students get involved?  Yes.  They also notes that there is a internship program, including virtual opportunities.  Http://education.wikipedia.org

They noted that people need to be ready to stand up for the content that they have added.  People need to understand how to defend their content.
Posted by Jill Hurst-Wahl at 10:50 PM