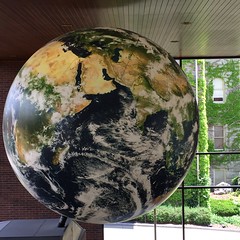 Josh Shear and Kelvin Ringold have started a new podcast series to muse on "better humanhood and dominating your world."  As I listened to episode 1 - entitled "I Reserve the Right to Change" (36 min.) - I thought of SLA and the changes that have occurred over the last several years with the association and those changes which are continuing.  We all tend to say that change is constant.  We might even say - in some situations - that change is necessary.  We frequently acknowledge that change is difficult.  However, do we give each other permission to make those necessary, difficult changes?

In the podcast, Josh talks about the changes that have occurred in his life as a musician and poet.  He acknowledges that those changes affected who he hung out with.  For example, when he no longer performed poetry, there were people whom he no longer saw.  He had given himself permission to change and was willing to live with the consequences.

As an SLA member since 1990 and a former member of the SLA Board of Directors (2011-2013), I had given SLA permission to change. Why was change needed?  The a difficult financial situation for the Association, coupled with the recession, and an inability for the Association to meet member needs provided the backdrop.  In 2010, I wrote that SLA has a staff of 20 and approximately 9,700 Association members. However a trend had started where more people discontinued their SLA membership than became new members.  Minutes of the December 2015 Board meeting report 6,586 members.  Minutes in early 2016 noted that membership had continued to decrease.  Fewer members and fewer people attending the Annual Conference meant less income which translated into having fewer people on staff and fewer services provided. (6/28/2016: According to the conversation on SLA Connect, it was reported at the open SLA Board of Directors meeting that as of May 31, 2016 the Association had 6,029 members.)

Now positive changes have occurred and occurred rapidly.  This year (2016), we have hired as association management company (AMC) named MCI USA. We did this because now the Association pays for the services needed/used, which is more efficient and financially prudent.  With MCI, we hired a new executive director (Amy Lestition Burke, MA, CAE). We also sold our building, which had become a weight rather than a real asset.  Selling the building has given the Association funds that can be put in a reserve and puts the Association financially back in the black.

The changes over the last several years have been difficult on everyone and especially on those who had not yet given SLA permission to change. My hope is that now that SLA has a better financial outlook, new staff focused on improving how SLA services its members, and a successful 2016 Annual Conference - new exhibitors/vendors/partners and a good group of first time attendees - that everyone who has called SLA home (or family) will give it permission to change.  Allows SLA to change and recognize that change is necessary and - yes - painful. Without change, growth cannot occur and, yes, SLA is now poised to grow again. What a positive change that will be!

Finally, at the conference, we were reminded that we are many chapters, divisions and caucuses within ONE association. One SLA.  One healthy SLA.  Let's give the Association the right to continue to change and to become THE association for innovative information professionals - information professionals and special librarians - and our strategic partners.  Let's each contribute our talents to ensure that SLA provides the professional development, networking and advocacy that helps all of us.
Posted by Jill Hurst-Wahl at 8:57 PM

Thanks, Jill, for putting into words the feeling I left the conference with this year. Let's hope our trajectory continues to climb.

Just got back into NZ so am just reading this now. But thanks Jill for those kind words.