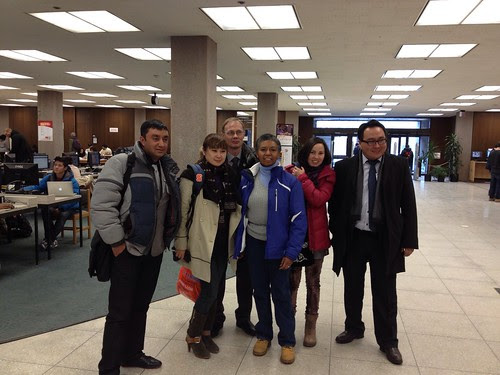 On March 4, I met with a group of visiting journalists from Kyrgyzstan, their local host (International Center of Syracuse) and a translator to talk about information access, libraries, copyright, literacy, databases, salaries for librarians and more! (I even told them about the Creative Commons.)  We met in the iSchool and upon request I took them to see our SU Library.

The work that our librarians do is much more than what the librarians in Kyrgyzstan do, according to this group.  We really work to service our communities, not just check out books.  The variety of library services that we have are not known there.

Their questions about literacy were interesting. 98.7% of the adults in Kyrgyzstan are literate.  According a 2003 National Assessment of Adult Literacy report, in the U.S.:


Twenty-two percent of adults were Below Basic (indicating they possess no more than the most simple and concrete literacy skills) in quantitative literacy, compared with 14 percent in prose literacy and 12 percent in document literacy.

Now I wonder how Kyrgyzstan has managed to have high literacy rates.  What could we learn from them?

They wondered if the digital resources in libraries are hacked and I don't think that they are, perhaps because information is so prevalent in the U.S.  I did talk about the need to keep our patron records secure and I allude to the PATRIOT Act.

@johntomlinson Tweeted this article about mobile kindergartens in Kyrgyzstan, http://ahmadladhani.wordpress.com/2008/12/27/learning-with-in-tent/ Thanks John!