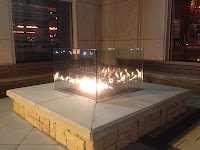 Normally I can recite with ease the conferences that I attended in a year, but not this year. Wow...what a year! The joy of attending conferences is joy of learning something new.  With the number of conferences I attended, this year, I'm glad that I have notes and blog posts to help jog my members.  Here are the highlights.

January - SLA Leadership Summit in Atlanta (Buckhead), GA - One of the things about this mid-winter SLA event is that no matter where the conference is held, it is always colder than expected.  Atlanta was no different.  (Watch out Dallas this coming February!)

The Leadership Summit is exactly as it is named...a meeting of SLA's leadership from around the world.  It is hoped that every unit in the Association is represented at this meeting, in order to keep the units up-to-date on the Association's activities.  Those who are seeking leadership positions in the Association are also encouraged to attend.  Not only are new procedures discussed, but there are activities to help the leaders gain new skills.

This meeting was at the start of my second year on SLA's Board of Directors and what stood out to me was the information that unit leaders needed to be hearing or paying attention to.  Indeed, my perception of "what's important" has changed since being on the Board, including what meetings are important (like the open Board of Director meetings).  I recognize that every SLA member cannot attend this event, but I also know that more members should be there to meet with the leadership, discuss issues, etc.

In March, I spoke at both the NYS Educational Media Technology Association Spring Conference and the Computers in Libraries Conference.  Educational Media Technology Association Spring Conference is a small event that impressed upon me the role of school library systems.  The conversations and presentations were inspiring and informative, especially around the use of ebooks with young children.


Keep in mind that this is an endurance sport.  Think Big.  Start Small. Move Fast.

I went to several sessions on ebooks and that topic repeated itself throughout the year. (If you're looking for a definitive answer in what is going with ebooks, suffice it to say that we are all still learning about them and that includes the authors and publishers.)

This year, I spoke at both the spring and fall SLA Upstate New York Chapter meetings (April and October).  While these are not conferences, it does allow me and others to talk about what occurred at the SLA conferences.  I'm pleased that as a member of the SLA Board of Directors I am able to bring information to my chapter that will be helpful to them.

Not on my blog calendar was the #140Cuse Conference that was held in Syracuse in April. My presentation was on digital literacy, which also was a theme in 2012.  (By theme, I mean something that kept coming up in conversations or conferences sessions like change, risk, ebooks, and digital literacy.)

I spoke at three conferences in June: New York Archives Conference, NYS Higher Education Initiative, and HighEdWeb Syracuse. Each provided an opportunity to hear what was on the minds of others, which included thoughts around technology and change.  Our profession continues to be in the midst of change.  We might even say that change is truly a constant for us.  In order to survive as an information professional, you need to be able to thrive in an industry that is in a constant state of flux.

I have attended every SLA Annual Conference since 1992 and this was the first one to be held in July and in Chicago.  It was HOT!  The keynote speaker was Guy Kawasaki, who had recently published the book Enchantment: The Art of Changing Hearts, Minds, and Actions

.  I never did write up notes from his talk, so here are notes from Chris Vestal, who did an excellent job capturing Kawasaki's main points.

The session that had the biggest impact on me was a talk given by Robin Bew from the Economist Intelligence Unit on the world economy.   We tend to think about our own regional or national economy, however, Bew provided a world view that I think we need to hear.   I recorded a podcast after Bew's talk, which will give you an idea of what thoughts he raised in me.

Here is a video of Robin New speaking in China in May 2012. While this is not the same speech that he gave at SLA, I think it is still worthwhile hearing the perspective that he gives. Start around the 5 minute mark, after his introduction to the event itself.  Part way through, he begins talking specifically about the Chinese economy.  While that sounds like it may not be relevant to you, it is interesting to hear what he says about business in China.

Chicago was an interesting venue for the conference.  All of the sessions were held at McCormick Place, which must be one of the largest convention centers in the world. There is talk every year among SLA members about what venue, location, etc., would be best for the conference.  Perhaps because I've been to over 20 SLA conferences, I know the positives and negatives of every option people put forth.  Every conference attracts those for whom it - and its location - make sense.  For some, that means going to a easy-to-reach location, etc., while for others it means traveling to an out-of-the-way  location for a very different experience (a la R-Squared below).

I didn't attend a conference again until September and the R-Squared Conference in Telluride, CO.  I wrote several blog posts during and after that conference, and you can read them here. For me, this was the most important conference I attended all year.  Why?  First, because I learned brainstorming and other techniques (e.g., community surveys and action briefs) that I have already been able to use and will continue to use.  Second - and more importantly - because it was a conference that dared to do things differently from where it was held, to having interactive keynotes, to unconventional sessions/tracks, etc.  This conference proved that we are hungry for events that feed us in different ways than what has become traditional.  I fully expect that other conferences will implement some of what was done at R-Squared and I'm sure they will be the better for it.

The two keynote speakers at R-Squared - Josh Linkner and Tamara Kleinberg - are both authors and their books are available for purchase.  I really appreciated the various brainstorming techniques that Linkner taught us in his interactive keynote session.  I have used several of them since then (role storming, brand storming and the long list).


In November, I attended the New York Library Association Annual Conference in Saratoga Springs, NY. I blogged about NYLA here and here. If I counted correctly, 20 students from the SU MLIS program attended the conference this year, which is 6-8 more than last year.  For me, that is one of the highlights of the event - watching the students interact with library practitioners (and future colleagues), listening to their observations, and hearing what they have learned.  Some wrote blog posts about the conference and I've linked to them from mine.

The keynote was given by David Weinberger. Here is a 3-minute video of MLIS student Pamela Gardner talking about both Weinberger and the session given by George Needham.

David Weinberger has written several books and I've provided links to them below. It was wonderful to see how his thoughts resonated with the NYLA attendees and I look forward to hearing him speak again.

If you've been keeping track, then you know that there are only four months this year where I did not attend a conference (February, May, August and December).  I am very fortunate that my employer helped me attend those conferences that were not in the Central NY region.  And I am also fortunate that a number of conferences were held "in my backyard."  That always makes getting to a conference much easier!  I also know that not everyone is so lucky.  For those who cannot get to a conference, we owe it to them to bring back what we have learned and to share it!  That sharing may be through tweets, blog posts, presentations, write-ups, or conversations.  If we come back from a conference and keep what we have learned to ourselves, then we have not helped our profession or society.  So if you have not yet talked about what you learned this year at a conference or educational event, please take time to do so.  Consider something you need to do to wrap-up 2012.
Posted by Jill Hurst-Wahl at 9:30 AM