In celebration of the 150 anniversary of the Emancipation Proclamation, the Preliminary Emancipation Proclamation toured New York State. This was the first time in decades that this document had left the State Archives. In Syracuse, people viewed it from 9 a.m. until midnight on September 27, with some standing in line for 2.5 hours just to get a glimpse.

I went at 9 a.m. before heading to work and am thankful that the line was short.  Still I didn't have forever to stand and read this draft, which contains President Abraham Lincoln's handwriting.  Rather than standing there and reading the text, I later went to the State Archive's web site where a digitized copy of the document resides.

I had not heard of a "preliminary" Emancipation Proclamation.  Its existence was not taught in school, yet now that I know it exists, I realize how important it was. 100 days before the Emancipation Proclamation was issued, Lincoln signed the preliminary which signaled his intent. If the Confederacy didn't comply, he would free their slaves.  On January 1, 1863, he did just that. 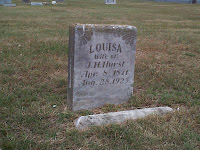 There is much that I don't know about my ancestry.  I do know that one set of great-grandparent lived and died in North Carolina.  It is likely that their parents were directly affected by the document that Lincoln wrote and signed.  Yes, that document - and the final version signed on January 1, 1863 - changed the course of my family and of my own life.

The other thrill for me, when I saw the document, was knowing that it has been digitized.  Digitized!  That actually meant that none of us needed to stand in line. We all could have gone to the web site instead.  Yet there is something special about seeing the paper and the ink there in person.  The lines of people in every city across New York State were a testament that in our digital world, paper still matters.
Posted by Jill Hurst-Wahl at 8:35 AM