NYLA12: Should we break with doing things a specific way? 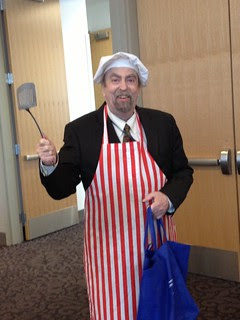 The New York State Librarian, Bernie Margolis, held a session at the New York Library Association Annual Conference in order to hear from his constituents. Since the session was entitled "Grill the State Librarian", Bernie decided to dress appropriately!  He remarked at the beginning of the session that "to grill" is an activity and that he would look for this to be a two-way conversation.

If you know Bernie, then you know that he likes to tell stories (and use props).  One story is about the width of railroad tracks. (I'll note upfront that this is great story that may or may not be true.)  The punchline has to do with something that occurred hundreds of years ago influencing how we do things do.  Why didn't we break with "tradition"?  Why didn't we look for and invest in a better way?

In libraries, we as guilty as the next organization in terms of always doing things the same way.  Even when shown a new, more exciting, more effective, or more efficient way of doing "X", we generally resort to the way it has always been done.  It turns out that change is hard. 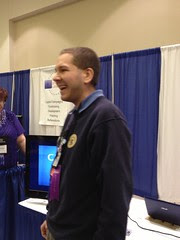 NYLA made several changes this year to the conference.  Most noticeable was that it used some newer spaces in the  Saratoga Springs City Center and Saratoga Springs Hilton Hotel (which are attached to each other).  This led to a little confusion and also joy since we didn't have to trek between buildings for specific sessions. [By they way, this convention center does not have the best signage.  With the renovations that they have done, I would think they would have improved the signage too.]

The other very noticeable change was having pecha kucha talks instead of a poster session.  Both practitioners and students gave short six minute talks in the exhibit hall on Friday.  The talks were very good and it was interesting to see how the presenters dealt with their surroundings.  (And even if they stuck to the strict pecha kucha format.)  This format reminds me that our presentations are often too long.  What if we shortened them and left more time for questions?  And what if we made our presentations such that they encouraged questions? 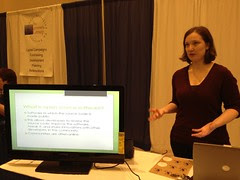 NYLA has been in Saratoga Springs for three years in a row.  Even though there were changes to the conference this year, we've grown quite comfortable with Saratoga and what it has to offer.  Things will get shaken up next year when NYLA returns to Niagara Falls, NY (September 25 - 28, 2013). The Convention Center is walking distance from the Falls and from Niagara Falls, Canada.  It is in an area that has continued to be renovated, which means we will all be learning something new and will be doing things differently!  Some who attend may have never seen the Falls and so this will give them a prime opportunity.  Yes, we may all break with doing things as we have in the past! 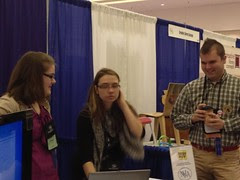 Oh...I've gotten ahead of myself.  BEFORE NEXT YEAR...can we take a moment to think about what we can do differently now? Did we all learn something at NYLA that we should be implementing now?  Did we learn something that we should be communicating to others now? During informal conversations, I learned more about how libraries interact with friends groups.  During two sessions, I learned more about how libraries are chartered in NYS and some of the implications. I need to create opportunities to discuss that information with my students.  Likely students do not consider how a library is chartered, when they are looking for a job, yet the library's charter (type) provides useful information about its environment.

Syracuse University students blogged the conference. Here are links to some of their posts (and as more are published, I'll add them):