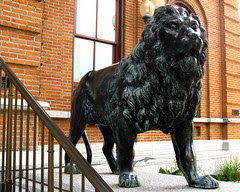 The New York Library Association (NYLA) just held its annual conference in Saratoga Springs, NY. NYLA brings together librarians from across the state for three days to share information, learn and network.  Librarians came from the rural and metropolitan locations, from public and school libraries, from library consortia, from the State Library, and from academic institutions.  Great to see LIS students in attendance!  And like every group of librarians that gathers together, it was an energized group  full of ideas and wanting to make a difference.

Throughout the conference, it was apparent the work that NYLA is doing to improve libraries in NYS.  NYLA is working with organizations on training for library staff as well as library administrators.  NYLA gets library school deans, chairs and program directors to talk about the education of future librarians and to hear concerns from the library community.  NYLA representatives meet with members of the NYS Department of Education, attend Regent meetings and visit legislators all in an afford to improve libraries across the state. Sitting in the annual business meeting, I was impressed with the long list of NYLA activities as well as the results those activities are achieving.  Bravo!

One highlight was hearing Commission of Education David Steiner talk about education in New York State.  What impressed me about his talk was that he understands that education must change and is changing.  For some, however, the changes are hard to see and some changes are happening faster than others. He noted that the three "legs" of education - curriculum, assessment and accountability - are all evolving.  Without these changes, the next generation of adults will not have the ability/skills/education to be good wage earners.  If our system does not change, he predicted that these adults will live with their parents because they will not be able to earn enough to live on their own.  (This is different than what is occurring now where some are living with their parents due to a lack of available jobs.  He isn't talking about a lack of jobs, but a lack of skilled workers to fill those jobs.)

Steiner talked about the inequity of education in the state - sometimes in the same neighborhood - depending on what the families can afford.  Children that go to public school are exposed to fewer hours of learning than those that go to private or charter schools.  Not only do charter or private schools spend more hours per days in learning activities, but they also may spend more days per year.  The more hours children spend in learning activities, the better they will be prepared for their futures.  Steiner understands that libraries have a vital role in expanding the number of learning hours and not just school libraries.  In fact, it was interesting that he consistently said "libraries" and not specifically "school libraries" (at least that is what I remember).

Commissioner Steiner noted that the Regents are interested in constructive input about the changes that need to occur.  You can contact them through email (addresses are on their web site).

One final note from Commissioner Steiner's talk...he noted that the state budget is not going to be better next year.  I've heard for months that next year will actually be worse.  I doubt that anyone is prepared for what that will mean to the services that we have available to us.

2020: What's Your Vision for Library Services in New York State? On Thursday afternoon, a group of more than 40 people gathered to discuss their vision for library services in the year 2020. Present at the session where members of the Regents Advisory Council on Libraries, members of the NYS Department of Education including Deputy Commissioner for the Office of Cultural Education Jeffrey Cannell, ALA president Roberta Stevens, and NYLA president Kathy Miller.  Each table-full of people in the room brainstormed the following questions:
I can tell you that there was no immediate consensus around any of the questions and that's okay.   What is important is to know what members of the library community are thinking about the future of libraries, so that the various organizations that are involved in pushing for our future have information that they can use.

Notes from the tables will be used in continued discussions on this topic, including a discussion by the Regents Advisory Council on Libraries meeting on December 3.  Anyone who would like to send in additional comments may email them to NYSLregcomments@mail.nysed.gov. 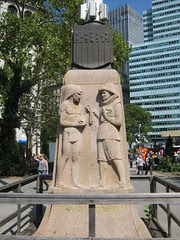 Late on Friday, I heard Professor James Loewen talk about "sundown towns". Professor Loewen is the author of Lies My Teacher Told Me: Everything Your American History Textbook Got Wrong

, Lies Across America: What Our Historic Sites Get Wrong

, and Sundown Towns: A Hidden Dimension of American Racism

. Professor Loewen has spent years researching and writing about aspects of U.S. history that have been mistold, misremembered or ignored. Although the statue on the right has nothing to do with sundown towns, Loewen spent a moment discussing it because it demonstrated a few of his points.  When you look at the statue which commemorates that purchase of Manhattan island by the Dutch from Native Americans, what do you see?  Do you see two equals?  Do you see one person who seems civilized and one who is barbaric?  Do you see one in summer attire and one dress for colder weather?  Is the head-dress one worn by Native Americans in New York State or by members of a plains nation?  What view of history is this statue meant to reinforce?  (This questions came from Professor Loewen.)

And what are sundown towns?  They are towns where people only people who were white or Caucasian were allowed to live (or be there after sundown).  These towns - and there are thousands of them - primarily adopted these rules (ordinances) between 1890 and 1940.  Without blinking an eye, I can think of two towns in Pennsylvania that were sundown towns.  One was a suburb of the state capitol while the other was a small town on the state's northern border.  In both cases, rules kept minorities from purchasing homes there for many, many years.

Professor Loewen's work has inspired others to research sundown towns (and sundown suburbs).  He asked the audience to contact him with information on sundown towns that they know of and to even research whatever ordinances helped to create those towns.

People & Food - Finally, I bumped into a lot of people that I know from across the state and enjoyed the few words we were able to share before heading off to the next event.  Although the weather wasn't very cooperative, we were able to go to local restaurants and remember why being in Saratoga is such a treat (Hattie's, Phila Fusion, Scallion's, Max London's, and Mouzon House).

I've been told that NYLA will again be in Saratoga Springs next year.  It is an affordable conference, especially for students, and a great location.  Start planning now to attend.
Posted by Jill Hurst-Wahl at 8:21 AM

It was interesting reading about the sundown towns because I never knew they had a name until I saw you write about it. Always knew about them, but these days I don't get around as much so I'm not sure if they're still that way. Great stuff!

Steiner's comments are interesting because all private schools (not charter schools, which are a different story)I am familiar with have many fewer hours of instruction and days of school than public schools. I always viewed this as a sad reflection of how much your background contributes to your academic success and how difficult it is to catch up if you come from a family that is poor and uneducated.

First, Susan, it would be interesting to know where (city) you are located, as well as if you mean day schools or boarding schools.

Good Information. Thank you for sharing. Recently I found one college which offers more than 30 courses in the Distance Learning format, as part of the college's commitment in providing quality education and extensive student support. Take a course anytime, anywhere at your convenience!