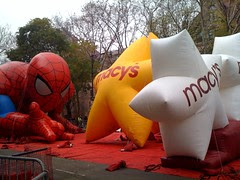 Here in the United States, we celebrate a day of thankfulness in November that historically is tied to a celebration of the Pilgrims with the Native Americans in 1621. Canadians celebrate Thanksgiving in October, which may be closer to when the first Thanksgiving occurred because that would have been at the end of the harvest...if indeed such an event actually occurred. At any rate, while we do pause to give thanks, the day is actually marked with big meals, big parades, and getting ready for big consumer sales on Friday.

What generally doesn't happen on Thanksgiving is thinking seriously about the people who were here before the Europeans landed.  There are more than 500 federally recognized Native American Nations within the boundaries of the U.S.  An honest map of the U.S. would show lots of spots that are not actually part of the U.S. because they are tribal lands.


The University of Oklahoma Law Center Library and the National Indian Law Library work with tribes whose government documents appear on this web site; these tribal documents are either placed online with the permission of the tribes, or they are U.S. Government documents, rightfully in the public domain.

If you're wondering about the First People among us and their laws (including information on land rights), this is a great place to start.
Posted by Jill Hurst-Wahl at 8:58 AM