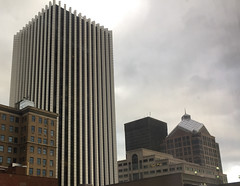 Chris Finger,  the library director from Geneva Public Library, gave a presentation on the library budget and budget process. This was geared for someone who is new at budgeting, however, there were useful takeaways for anyone.

Finger wants library directors to understand what they control in the budget.  In other words, are there specific line items that can be controlled, rather than items (e.g., heat) which the library cannot control?  He asked us to consider what control should look like.  He also suggested that we not nitpick the small items, but look at those larger items, which have a greater impact on the overall budget.

Finger talked about where the funding comes from and used his library as an example.  He noted that taxes are the library’s most stable income source.  The library has no control over other funding sources, such as grants.

In thinking about the budget and seeing support for it, Finger wants library directors to be a voice of reason be an advocate for change, and be willing to speak out on your budget needs.  You should look at the budget and determine those areas for which your funders will be willing to provide stable support.

In terms of friends groups and foundations, Finger suggested that the library be honest about what its needs.  Can the group give you the money to address your needs?  That might be different that what its funding has been used for in the past.  He said that the true value of a friends group is its goodwill and its ability to be an ambassador for the library.  Yes, it raises money, but it does much more than that.

Finger advocated for creating multi-year budget scenarios, so you can see how funding changes will impact future years.  That would also allow you to show how increased funding, for example, would impact what the library would be able to do in future years.

Finger believes in looking at where money needs to be spent.  For example, don't consider replacing a broken desk as being a luxury item. That is something which needs to be done and funding should be spent on it.  Also don't use the budget to pit departments against each other, if at all possible. Make the budget something everyone can support.

The Budget-Building Book for Nonprofits: A Step-by-Step Guide for Managers and Boards 2nd Edition (2007)