In 2006, I was stopped on a subway platform in Washington, DC by someone who knew me through my blog.... and the person actually recognized me in public as I was hauling my suitcase to my hotel. The truth was clear -- I was not longer a wall-flower; I was known.

Out of several of the sessions on Tuesday came a long evening conversation about identity, reputation, authenticity and community. Web 2.0 has changed how we present ourselves, so that who we are isn't just who we are in the flesh, but who we are online. Some of us really think long and hard about how to move our "selves" into the online world. We want to "be online" in a way that reflects authentically who we are in real life. With that in mind, let's think through the four words.

Identity -- It's important that we each understand what our identity is online. Is our identity consistent? If I am Jill_HW on Twitter, for example, am I Jill_HW everywhere else? There are some among us who have done just that like Michael Porter, Michael Stephens and others. Why is it important? If I know mstephens7 on Twitter, I know what user to look for in Flickr. Michael S. is in charge of his identity. 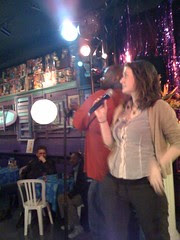 Reputation -- I have been very impressed at the number of people who know me or my name (my identity), and are impressed with my reputation. My reputation, however, has been built by me and by my community. My community includes many people with whom I have worked, attended conferences, or communicated. While I can impact part of my reputation, it is my community that really has control of it. If I live my life justly, I hope that I'll have a good reputation. But we know that one mistake (e.g., former presidential candidate Gary Hart) can tank someone's reputation.

In 2006, when I attended my first Computers in Libraries, I was amazed that I already had a reputation with other presenters (and some attendees) and that it was positive. How did they know me? They knew me from my blog posts and from the content I had placed online. Other speakers "friended" me after the conference (initially in Flickr) and professional friendships ensued. That has led to us exchanging ideas and advice, which has been wonderful. Over the years, my CIL network has expanded, and being connected to people like Michael Sauers, Maurice Coleman, Sarah Houghton-Jan and others has only helped my reputation.

I know, however, that I could lose my positive reputation at any moment. I need to be mindful of my real life and online identities, and the information that circulates about me. I know that whatever I place online may be used or misused by others, but that it is a risk that I need to take. It is a glass house that could fracture with the toss of a stone.

Paul Holdengraber yesterday acknowledged that he knew that he was being blogged and tweeted. He said he could feel it! He knew that he had no control over what people were saying about him. He, however, understood that not controlling everything about his reputation was an important aspect of being "out there" for him and the NYPL.

When I thought about this post in the middle of the night, I didn't think about this being so long. Likely I'm "beating a dead horse"...and maybe that's okay.Technorati tag: