Innovating Professional Conferences, Part 3: Can we bring remote participants into a conference? 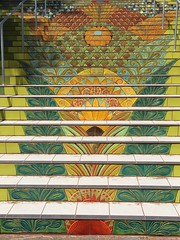 After I started this series (part 1 & part 2), I spoke to Paul Signorelli about it and he sees the innovation needed as being different and I want to capture that idea here.

While I think that we need to move our professional development from conferences to the online environment, Paul believes that we need to use our online technology to bring remote participants to a face-to-face conference. Before the ALA Annual Conference, Paul outlined a myriad of ways that he thought it would occur. Near the end of the conference, Paul hosted a session to talk about and experiment with bringing remote participants into the room. They tweeted - and colleagues tweeted back - and they tried doing Google Hangouts with lots of people (and it worked).

Some conferences will not want to open their face-to-face sessions to virtual participants. They will see that as losing income, because they are giving away content. Others might charge for the privilege of attending virtually, so they can setup reliable technology in the conference areas to facilitate that interaction. Others will open the doors, by letting participants be the gateway on their devices and data plans for that interaction. You'll recognize that the last option is occurring at many conferences, but I don't know of a conference that has wired itself so remote participants are seamlessly included in every session.

While I like the idea of bringing remote/virtual participants into a conference, they would also need remote access to the exhibit hall or to information about what is in the exhibit hall (and more than just a short description). There would also need to be a way for ad hoc interactions, which happen at conferences. Paul and I discussed the idea of having kiosks or cameras where people on-site could interact with whomever is online. It would be a version of those random interactions that occur in the hallways or standing in line.

Are there other problems with conferences and other solutions? Yes. In fact, there are likely as many problems and solutions as there are conferences and conference participants. The key is being willing to change...and for some conferences, those changes a long overdue because their number of participants and exhibitors are dropping. If they believe that professional development is important, then now is the time to do it differently, before their audience is completely gone.
Posted by Jill Hurst-Wahl at 11:00 AM

It would be worth trying the periscope app as a way to encourage remote participation. It's simple to use and you could even have a Periscope registration fee if you wanted to gain revenue.