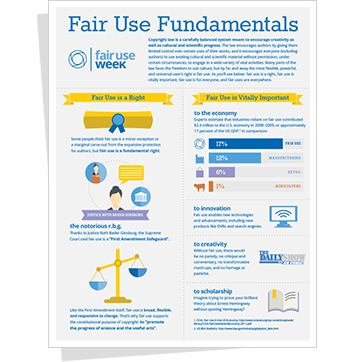 The Fair Use Week web site has this infographic on Fair Use Fundamentals.  Thankfully, it carries a Creative Commons license, so you are able to share and reuse it, if you wish - and I think you will indeed wish to use it!
Posted by Jill Hurst-Wahl at 9:30 AM 1 comment: Links to this post

Another copyright video from John Green

John Green provides a wonderful illustration of several problems with current copyright law in this video entitled "Across Three Continents: A Tale of Tumblr, Copyright, and Excellent Posters." I encourage you to take a few minutes and watch it.


--
Thanks to Kristen Hanmer for pointing me to this one, too!
Posted by Jill Hurst-Wahl at 10:02 AM No comments: Links to this post

This is AWESOME!  Author John Green explains where a quote attributed to him really came from, and tries to set the record straight. Mis-attributions are quite easy these days with the Internet. Wouldn't it be nice if we all worked to get the attributions correct?

--
Thanks to Kristen Hanmer, MSLIS for pointing out this video to me.

Posted by Jill Hurst-Wahl at 9:44 AM No comments: Links to this post

Blog post: Fair Use: The Foundation of Jon Stewart’s Success

In this blog post, Jonathan Band talks about how Jon Stewart was able to use Fair Use to use clips in his commentary.  As Band says:


But for fair use, Stewart’s rebroadcast of these clips would be willful copyright infringement, subject to statutory damages of up to $150,000 per clip.

You can read the entire blog post here and it is a worthwhile read, whether you like Jon Stewart or not.
Posted by Jill Hurst-Wahl at 9:00 AM No comments: Links to this post

The Society for U.S. Intellectual History (S-USIH) has a blog.  Kurt Newman wrote a fascinating post in January on the origin of copyright law in the United States. We know that the federal law was enacted in 1790, but what happened before then?  Have any of us read the history on the copyright.gov web site?  Likely not.  Newman peaks our interest early in his post with this:


Soon thereafter, lobbying by prominent men of letters...led to the passage of copyright laws by the legislatures of Massachusetts and Maryland. Thus, by the time that the Continental Congress met to consider copyright matters, three state-level copyright regimes had already been set in motion.

And was was being copyrighted?


The state copyright statutes stipulated the protection of an array of inanimate things: “books,” “books and writings,” “books and pamphlets,” “books, treatises and other literary works” and “books, pamphlets, maps and charts.” Most also called attention to the special ontological properties of a certain textual object: the “unpublished manuscript.”

How do we now think about the objects being copyrighted?  Has our thinking been determined or adversely influenced by these early laws?  I think we need to ask ourselves that, especially as the objects continue to change.

--
Thanks to Brandon Fess, MSLIS '15 for pointing out this blog post to me.
Posted by Jill Hurst-Wahl at 9:00 AM No comments: Links to this post

I have now been back in Syracuse for several days, after a successful ALISE Annual Conference. ALISE - The Association for Library and Information Science Education - is the one conference where I interact with a room-full of people who do what I do in academia. This was my third ALISE conference and it was as welcoming and as insightful as my first. The conference is held right before the ALA Midwinter Conference and in the same city, which also allows people at one conference to perhaps see those coming for the other, which is also a nice benefit.

When I attend a conference - as a participant or speaker - I always "do" the conference, which means that I go to the sessions. You have already seen my blog posts from ALISE, so you know that I went to many interesting sessions. Others also blogged and tweeted the conference, which helped us share information with each other and with those who were unable to attend.  Among the blog posts is one by Diane Rasmussen Pennington that helps to wrap-up the conference (see ALISE 2015: Breaking down silos, pouring coffee). Adam Worrall dominated the twitterverse, which I appreciated, since we didn't tend to go to the same sessions. 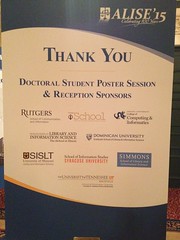 ALISE has two poster sessions - work-in-progress and doctoral - which are good for networking and garnering new ideas. One of the most interesting posters I saw was "It’s all about the 2.0 Bro: A Future Study of the Impact of Technology on Millennial Males Choosing the Library Profession" by Heidi Blackburn. You can read the poster's abstract AND see the poster at http://works.bepress.com/heidi_blackburn/19/.

Many dean, directors and chairs of MSLIS academic programs attend ALISE, which provides a good opportunity to talk about how things are going, share what's new with our programs, and discuss ALA accreditation.  One of the things we did was to review the proposed new ALA Accreditation Standards, which were to be voted on the ALA Council (I think) during the Midwinter conference.  As I write this, I do not know if the new standards were adopted.  If yes, programs would begin using them for their accreditation review in 2018.  (Addendum, 8:09 p.m. ET - I just learned that the revised standards were adopted with one wording revision.)

These new proposed accreditation standards are a revision to the standards adopted in 2008.  Those were the first revised standards since 1992.  Because the LIS profession believes in the standards, I think more practitioners should read the standards and understand what they mean to an LIS program.  For example, the standards don't mean that every program teaches the exact same thing.  They do mean that programs need to demonstrate that they are supported by their larger institution, for example. I bet most LIS programs would be willing to talk about the overall accreditation process (from biennials to the self-study and to the decision by the Committee on Accreditation).  Because of the importance of that process, wouldn't it be interesting if the state-level library association conferences had sessions so that practitioner understand the impact of the process on everyone involved (including the practitioners themselves)? 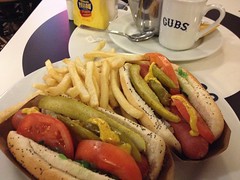 Finally, I want to give a shout out to some great Chicago restaurants and eateries. I ate twice at the Chef's Burger Bistro, which serves much more than burger (e.g., Chop House Blue, which is a pulled pork sandwich like none other, and the Grilled Tuna sandwich).  I had lunch at the Michael Jordan's Steak House Bar, which is in the InterContinental Hotel (Rotisserie Chicken & Arugula Salad).  The Eleven City Diner is a New York City style diner with great sandwiches, and I had dinner there will Paul Signorelli, who was in Chicago for ALA Midwinter.  I also ate at Potbelly Sandwich Shop, a chain that is not in my region, and the Cubs Bar & Grill at the airport, where I had two Chicago-style hot dogs.  A wonderful conference, great conversations, and good food - the best combination!

Addendum (2/5/2015): Andrew Dillon, who also attended the Deans and Directors meeting at ALISE,  has written a thought provoking blog post on accreditation entitled "Please reform accreditation."
Posted by Jill Hurst-Wahl at 7:59 PM No comments: Links to this post